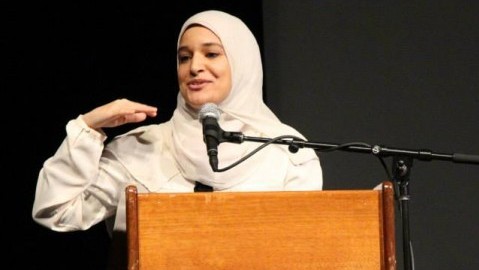 Naiyerah Kolkailah, a graduate of a two-year program in Islamic studies from Doha, Qatar, spoke on issues related to Islam, including women and Islam in America on Friday evening. The talk took place in the Commonwealth Honors Events Hall as part of Islam Awareness Month.

Kolkailah first told the audience a story, describing a time a woman came up to her at a grocery store and asking if she advocated for Sharia law (Islamic law) in the U.S.

Kolkailah said she asked the woman what Sharia law meant to her. The answer? “The oppression of women.”

Kolkailah explained that “there’s a lot of people, still, (who) tend to conflate governmental laws with religious teachings and religious rulings, and it’s important to be able to distinguish those from each other.”

She added that this can be particularly problematic in societies like the U.S. as “people who don’t have personal interactions with the Muslim community, as well as people who haven’t visited a mosque or haven’t been to a Muslim majority country…tend to be consumed by the media’s portrayal of Muslims, and the sweeping generalizations about Islam and Muslims.”

Kolkailah reminded the audience that about one-fourth of the world’s population practices Islam.

She said that people often see the oppression of women as a very serious problem for countries where Muslims are the majority.

“In terms of women’s roles and their status in society, that is a subject of contention, not only in the Muslim world, but it’s been a subject of issues related to power struggles and debates and conflicts throughout history and throughout many different civilizations,” Kolkailah said. “When women across cultures are marginalized and objectified and discriminated against, it’s important to see and identify the social structures that can actually cause women to be relegated to certain spheres and not have a voice and influence in society.”

Kolkailah also discussed the perception of Muslim women in the contemporary world.

“There is a combination of things that affects your own paradigm and your own perception of women. Now if you take this in general, and globalize it to the worldwide Muslim population, you will find that across the Muslim world, there’s a very diverse range of views as to who women should be, what their roles are, whether or not they can get an education, how they should be dressing,” she said. “It’s impossible for us to lump them all together (when there are) 1.6 billion Muslims in the world.”

Kolkailah addressed sweeping misconceptions of Muslim women and how their religion regards them. She gave the example of pre-Islamic Arabia, where women were seen as inferior to men.

Islam began to combat this, Kolkailah said, by prohibiting female infanticide and “mandated seeking knowledge for all men and women.”

“It’s through that education that you’re able to address and get at social structures,” she said.

Kolkailah told the audience that, “The Prophet Muhammad said ‘seeking knowledge is mandatory for every Muslim, male and female.’”

According to her, Islam gave women independence, property rights, and acknowledged unique femininity and personalities.

“Islam promotes modesty and respectful interaction, because that’s actually what allows the men and women to collaborate together in the purest of forms,” Kolkailah stated.

However, Kolkailah said Muslim countries don’t live up to the entirety of the equality promise, adding that it is up to women to work with allies to make changes to reach equality.

During a question and answer period, Kolkailah was asked where in the Muslim world women have achieved the most parity.

Kolkailah ended her lecture saying, “You have to make a decision, because Islam is being attacked. The Islamophobia industry right now is huge… Are we going to assimilate and drop our faith, and not have that strong Islamic identity or assurance in how we want to live our lives? Or are we going to embrace it and try to understand it, and see it as a divine revelation that is giving us a way to live a successful life, in this life and the next?”

Rachel Walman can be reached at [email protected]