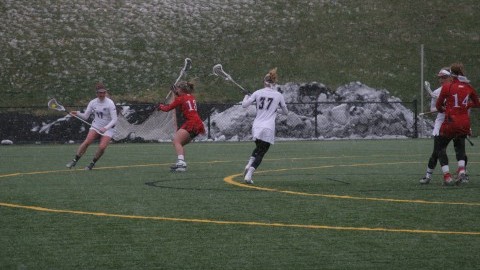 The NCAA tournament is notorious for producing heroes and memorable games. For the Massachusetts women’s lacrosse team, Friday’s game was one for the ages, as it edged out the Princeton Tigers 13-12 on an overtime goal from Eileen McDonald.

With just 14.6 seconds left on the clock, it looked as though the Minutewomen (19-1, 9-0 Atlantic 10) had sealed their way into the second round of the NCAA tournament. Callie Santos put the ball in the back of the cage off a pass from Hannah Murphy to give the Minutewomen a 12-11 lead over the Tigers (11-6, 6-1 Ivy League).

But in a back-and-forth contest that seemed as if each team had an answer for the other’s goals, it was only fitting Princeton found a way to send the game to overtime. In a sport where buzzer-beaters rarely happen, the Tigers created magic in a thrilling final seconds as Olivia Hompe scored with under one second remaining to tie the game at 12.

“You think with that little time left, even if you lose this draw with 14 seconds, there’s still not a lot of time for them to get down there. It was a little disheartening,” UMass coach Angela McMahon said.

Hannah Murphy helped set up McDonald’s goal, dodging defenders before flipping it to her with 2:23 remaining in the extra period.

McMahon was proud of the way her team fought back in the game, never getting discouraged no matter the score.

“It shows a lot about our team and our spirit and our will to win and how badly our girls want it,” McMahon said.

Erika Eipp led all scorers with four goals and a pair of assists. Santos scored three of her own, while Holly Turner netted two.

As McMahon has done all season, she stuck with her strategy of employing Sam Walters in cage for the first half and Aileen Kelly in the second. McMahon never was forced to make the decision in the regular season, and with the season on the line, she chose Kelly.

Kelly made two saves in the extra fame.

“At that point Sam had been sitting and getting cold. You have to go with whoever has the rhythm at that point,” McMahon said. “I would have completely trusted Sam, but Aileen was warm and playing well at the time, but it really just felt like a continuation of the second half in our opinion.”

After the Tigers’ Anya Gersoff scored the opening goal 24 seconds into the contest, the Minutewomen scored four-unanswered goals.

Princeton led 6-5 at the half.

UMass will face Cornell (14-4, 5-2 Ivy League) in the second round of the NCAA tournament on Sunday. Opening draw is set for noon.