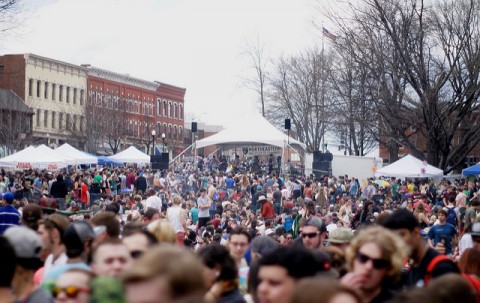 Thousands of people came to the Three County Fairgrounds in Northampton on Saturday to see live musical performances and to support the cause of legalizing cannabis at the 25th annual Extravaganja.

The University of Massachusetts Cannabis Reform Coalition hosted the event, sponsored by Wildside Smokeshop, the Northeastern Institute of Cannabis, Social High and Haven Body Arts. Police Chief of Northampton Jody Casper warned at the start of the event that marijuana is not legal and that the event would not get out of control.

Security stood at the gates checking people coming in for alcohol, weapons and other substances, although attendees were allowed to bring cannabis products in.

The event had a large presence of Northampton Police Officers and members of the University of Massachusetts Police Department assisting the paid security by helping direct traffic and issuing citations when necessary. The UMass CRC collaborated with police to help insure a safe and successful rally for the thousands of people in attendance, said Nikki Striar of the Coalition in an email.

This was the event’s first year of being held at the Three County Fairgrounds after years of being held in downtown Amherst for many years. The location changed due to a need for a venue with the capabilities to handle a larger crowd, as Amherst refused to issue a permit for the event this year.

Many people were openly smoking marijuana or using other forms of the drug such as cannabis extracts and edibles.

People were also dancing in front of the stage and listening to the live music. UMass student Dusty (editors note: real name Dustin) Smith, a junior public health major said he attended the event to see the music performers.

“I came out for Shokazoba.” Smith said. “They’re a sweet band.”

The crowd had a relaxed atmosphere as people sat on blankets listening to the bands and speakers. The event had many different vendors with a wide array of items including glass pipes and other smoking products, and even specialty items like cannabis soaps.

The UMass CRC helped organize and facilitate the events permits and fees, private security, trash cleanup and other organizational aspects of Extravaganja. The group had reached almost 3,500 dollars on the minute fund that was made for the event, which ended at 7 p.m. on Sunday.

The event had many speakers passionately urging the crowd to help support the legalization of marijuana.

The group Regulate Marijuana like Alcohol has campaigned for a regulation to legalize and regulate adult ownership of marijuana and promoted a statewide ballot initiative for this purpose.