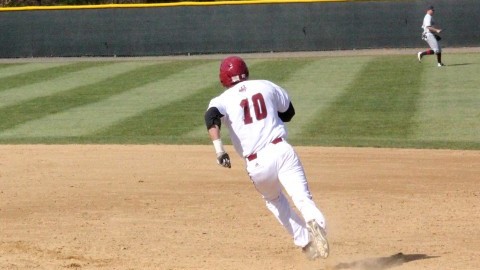 The Massachusetts baseball team was looking to build some momentum heading into the final stretch of the 2016 by winning its second to last nonconference game remaining on the schedule Wednesday afternoon in Lowell.

The Minutemen got down early with UMass Lowell scoring two runs in the first inning, and could not recover falling 7-3 at the hands of the River Hawks (18-27, 5-16 America East Conference) at LeLacheur Park in the first-ever Division I matchup between the two schools.

Senior Kevin Lacy started his first game of the season for UMass (14-24, 7-11 Atlantic 10), pitching just four innings, allowing five runs (three earned), six hits and a walk. Lacy held an earned run average of 2.80 in eight appearances as a reliever prior to his losing effort Wednesday.

The Minutemen never led at any point of the game.

“We wanted to give him a chance to start during his final season,” UMass coach Mike Stone said. “I have a lot of confidence in him going in there and being a strike thrower. He ran into a little bit of trouble early but we bounced back and got within a couple (runs) both times and (Lowell) extended. Each time we got some runs they would extend (the lead).

“The big blow was the two we gave up in the eighth because we were pretty close to making some things happen. We just didn’t do enough.”

UMass’ offense was stagnant for the majority of the contest. The Minutemen scattered just five hits on the day and did not register a hit in the final three innings.

Jon Avallone kicked off the scoring for UMass, driving in Ryan Lever in the fourth inning on a double to right field to cut the Lowell lead to 3-1.

A two-run sixth inning pulled UMass again back to a two-run deficit, trailing 5-3 after a Mike Hart triple scored Dylan Morris, and a John Jennings ground ball to second allowed Hart to cross the plate.

Brett Evangelista, Vinny Scifo and Morris were the other three Minutemen to tally hits. Connor Donahue, Kevin Hassett and Ben Panuzio each saw some relief action on the mound, with Donahue pitching 3 1/3 innings. Hassett and Panuzio both pitched one-third innings in the eighth.

Despite a record 10 games under .500, UMass finds itself just four games under that mark in its conference record heading into the final week and a half of play, with six games coming against conference opponents in hopes of making the A-10 tournament.

“We’re trying to win every game,” Stone said. “We’re not focused on next year at all yet. We’re trying to do all we can to win a ballgame – game to game – is the way we have got to look at it.”

“We’ve got a big series (coming up) and mathematically we’ve still got a chance to get into the (A-10) tournament. We need to play well. We need to have a good approach at the plate. We need to hit line drives, hard ground balls and limit our fly balls, pop ups and strikeouts. We’re certainly capable of putting together a good offensive game each game we play.”

It doesn’t get any easier for the Minutemen, who travel to Kingston, Rhode Island this weekend to do battle with A-10 rival Rhode Island (22-22, 13-5 A-10) in a weekend series with the Rams, who are riding a three-game winning streak coming off a sweep of Dayton. First pitch at Bill Beck Field comes Friday at 3 p.m.

“We’re certainly not look towards the future other than the future being Friday,” Stone added. “We’re looking game to game to make something happen to put ourselves in position to win a ball game.”