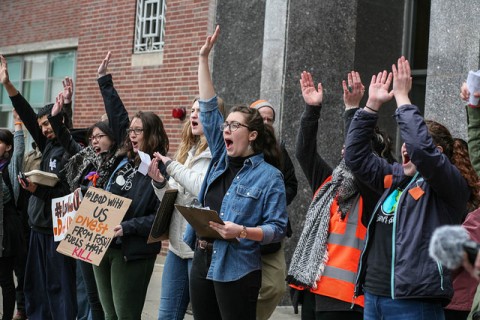 AMHERST– By a unanimous vote from the University of Massachusetts Foundation’s Board of Directors, UMass will become the first major public university to divest its direct investments in fossil fuel companies, according to the school’s press release.

In mid April, hundreds of University of Massachusetts students held a sit-in inside the Whitmore Administration Building, demanding the university cut its investments in fossil fuels. The protest lasted eight nonconsecutive days and over 30 students were arrested for trespassing on the property. Today, their efforts have been rewarded.

“This action is consistent with the principles that have guided our university since its Land Grant inception and reflects our commitment to take on the environmental challenges that confront us all,” UMass President Marty Meehan said in a statement released Wednesday. “Important societal change often begins on college campuses and it often begins with students.  I’m proud of the students and the entire University community for putting UMass at the forefront of a vital movement, one that has been important to me throughout my professional life.”

The student-run UMass Fossil Fuel Divestment Campaign originally aimed to have UMass pull all investments from fossil fuels. However, after Meehan met with both the campaign’s leaders and UMass Chancellor Kumble Subbaswamy on his visit to the Amherst campus on April 21st, a compromise was reached to cut all direct investments.

“The Foundation’s action today makes a powerful statement about UMass’s commitment to combatting climate change and protecting our environment,” Subbaswamy said in a statement Wednesday. “It also speaks volumes about our students’ passionate commitment to social justice and the environment. It is largely due to their advocacy that this important issue has received the attention that it deserves.”

With only $5 million of the UMass Foundation’s $770 million endowment dedicated to the fossil fuel industry, the economic impact will be relatively small. Still, supporters and activists are expressing excitement over the step forward in the fight against climate change.

Upon learning the news of the Foundation’s decision, Campaign Media Spokesperson Mica Reel responded, “We’re all extremely excited and this is such a huge moment for student activism and the movement as a whole.” She added, “This couldn’t have happened if every single person who showed up didn’t show up, so I hope that everyone is just as happy as we are. They should be proud and feeling empowered, that they themselves have a voice and that they have power to make a change.”

The press release detailed that Meehan plans “to tap the President’s Science and Technology Initiative Fund, which last year provided more than $900,000 in grants to UMass faculty researchers.”

He also plans “to ensure future funding for sustainability/green technology projects and for UMass to boost its academic and financial involvement in offshore wind energy.”

The University’s Board of Trustees is set to meet on June 15th to bring the issue to a vote. The board is expected to endorse the decision at the meeting.

As for the UMass Fossil Fuel Divestment Campaign, Reel said that their work is not over.

“Divestment as a movement is about so much more than just removing money from the fossil fuel industry,” she said. “It’s about reinvesting in the community and reinvesting in renewable solutions, so we’re hopefully going to be working with [the Board of Trustees] moving forward.”

Stefan Geller can be reached at [email protected]