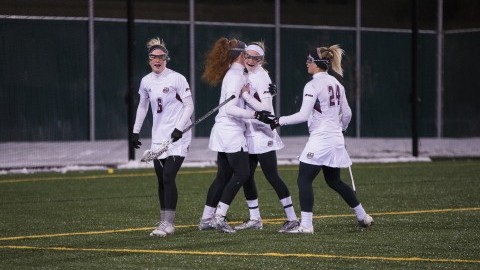 For the first time in 32 years, the Massachusetts women’s lacrosse team is headed to the quarterfinal of the NCAA tournament, defeating Cornell 7-6 Sunday afternoon.

One would have never guessed the Minutewomen (20-1, 9-0 A-10) were the lower seed after the first few minutes of the game. UMass took it right at the eighth-seeded Big Red (14-5, 5-2, Ivy) – who were playing on their home turf – getting out to a 4-0 lead in the first nine minutes of the contest. This blistering start that was ultimately the difference in the game, as Cornell (14-5, 5-2 Ivy) never held a lead.

“I thought it was a fantastic and really exciting game. I thought both teams really battled out there, and a huge credit to Cornell, Minutewomen coach Angela McMahon told Masslive after the game. “They had a great season. They really tested us all throughout the game. Just really happy to be able to come away with the win and maintain possession at the end there.”

The four-goal run at the start of the game was spurted by Erika Eipp, who scored the first two goals of the contest, her 37th and 38th of the season.

From there, both teams began trading goals. Ultimately, it was the Big Red who scored two consecutive goals to end the half from Olivi Mattyasovszky and Taylor Reed, closing the UMass lead to 6-4.

The Minutewomen got on the board first in the second half, advancing their lead to three goals. From there, goalkeeper Aileen Kelly made some big stops for UMass. After allowing two goals in the first 10 minutes of the half, Kelly kept Cornell from finding the back of the cage, making all six of her saves in the final 20 minutes of the contest.

Eileen McDonald followed up her late game heroics in the first round with two goals and an assist. Callie Santos found the back of the cage, while Hannah Murphy scored a pair of goals.

The Minutewomen created extra possessions for themselves winning the groundball battle 15-10, and also dominated the draw controls in the second half (4-0).

UMass will take on No. 1 Maryland in the Elite Eight next Sunday in College Park, Mayland. The Terrapins (20-0, 5-0 Big Ten) defeated the Minutewomen in the second round of last year’s tournament, 19-8.