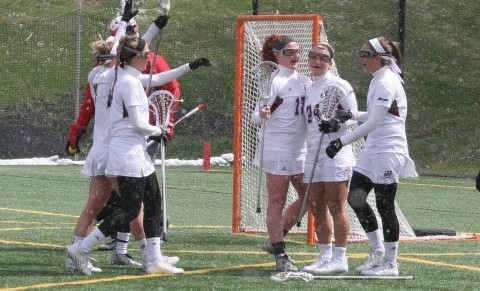 Seniors on the Massachusetts women’s lacrosse team will never know what it’s like to lose to an Atlantic 10 opponent in the regular season following a 12-5 victory Saturday against Davidson, extending its conference winning streak to 45 games.

“They’re instrumental to our success,” UMass coach Angela McMahon said about the senior class. “ They’ve all been staples on our team and more important they’ve been some of the best leaders we’ve ever had maintaining appositive culture for our program.”

The game began slowly for the Minutewomen (16-1, 9-0 A-10) without a goal for almost the first ten minutes of the game. UMass’ offense couldn’t establish much rhythm while the Wildcats (8-8, 5-4 A-10) created a few scoring chances early on.

A couple of impressive saves by goalkeeper Sam Walters kept the score at 1-0 before an off-target pass by Davidson opened the door for the Minutewomen to score their first goal.

With 20 minutes, 50 seconds to go in the first half, Callie Santos opened the scoring for UMass with an assist from Hannah Burnett to tie the game at one. The Minutewomen would go on a five-goal run with five different players scoring to take a 5-1 lead.

“After Nicole Troost got injured I think a lot of our players had to step up into new roles,” attacker Holly Turner said. “ They’ve done a great job stepping into roles they weren’t necessarily used to.”

Turner was one of three UMass players to score two goals to go along with her two assists. Erika Eipp also finished with a team-high four points (one goal, three assists) on the afternoon.

The Wildcat offense was off rhythm throughout the game with 18 total turnovers leaving a lot of chances for UMass to maintain control of the ball and ultimately the game.

A large amount of stray passes from Davidson led to ground balls being up for grabs, as the Minutewomen finished with 39 compared to the Wildcats 25.

“It takes focus and want,” senior defender Anne Farnham (six ground balls) said. “You just need to expect the pressure right away and I think we practice well and out team gets us ready for moments like that.”

A free-position shot for the Wildcats provided a little bit offense in a half largely plagued with unforced errors and inconsistent offense as they headed to the break trailing 5-2.

The Minutewomen came out hot in the second half with three unanswered goals in the first five minutes to open their lead to 8-2.

However Davidson would mount its only offensive run of the game with three straight of their own to answer and bring UMass’ lead back down to three.

“When that happens we just need to take a breath and relax,” Farnham said. “We know what’s happening, and it’s just important that we just refocus.”

McMahon added: “I think we had times when we were just on fire and times when we just couldn’t get a rhythm going. In the (A-10) tournament it’s going to be important that we can sustain our runs on offense and stop other teams’ runs as well.”

A foul by the Wildcats with just under fifteen minutes to go would allow a man-up opportunity for the Minutewomen. A quick series of back-to-back goals by Hannah Murphy and Eipp less than one minute following the foul would re-establish UMass’ control with a 10-5 lead and 13:45 to go.

UMass would close the game with the last two goals putting a bow on its senior day, with the last four players to handle the ball being seniors Kate and Anne Farnham, Eipp and Eilleen McDonald.

The Minutewomen can now look ahead to the conference semifinals on May 6.

Despite the loss of both Troost, and sophomore attacker Bella O’Connor who suffered a knee injury Saturday, the UMass offense has not lost a step in terms of shots or scoring heading into the tournament.

“We kept the chemistry together really well,” Turner said. “We’re just a really close group of girls and we just always want to play our best and our hardest for each other.”