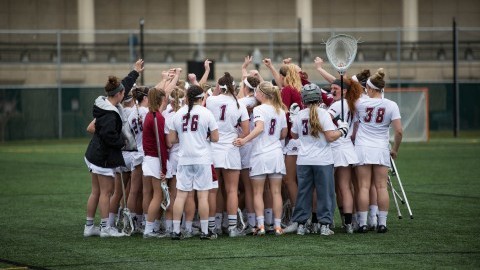 Number eight might not have been as easy as the previous seven, but for the No. 16 Massachusetts women’s lacrosse team it was just as sweat.

After going back-and-forth with Richmond for the first 40 minutes of Sunday’s Atlantic 10 championship game, UMass (18-1, 9-0 A-10) overcame two second-half deficits and scored four goals in the final 18 minutes, 32 seconds to secure its eighth straight A-10 title.

Callie Santos scored her 31st goal of the season at the 18:32 mark to tie the game at seven, which allowed Abby Walker, Hannah Burnett and Holly Turner the opportunity to put the game out of reach for the Minutewomen in their 10-7 victory.

Richmond (9-10, 3-6 A-10) entered the championship having won four consecutive games – including two upsets over Duquesne and George Mason – following its 18-10 loss to UMass on April 22.

Eileen McDonald opened up the afternoon with a pair of goals in the first minute of regulation, and finished with four in the first half before Santos tied the game at five with 1:31 remaining. McDonald and Santos (three goals, one assist) each led UMass with four points apiece.

Richmond’s best run of the game came at the end of the first half, scoring three consecutive goals from Kim Egizi, Mia Castagnero and Brooke Wilson to take its first lead of the game. Wilson finished with a team-high three goals for the Spiders.

As Minutewomen coach Angela McMahon has done all season, goalkeepers Sam Walters and Aileen Kelly each played a half in cage with Walters making four saves in the first half and Kelly with seven in the second.

UMass will head to Ithaca, New York for the first round of the NCAA tournament, where the Minutewomen will play Princeton (11-5, 6-2 Ivy League) on Friday.