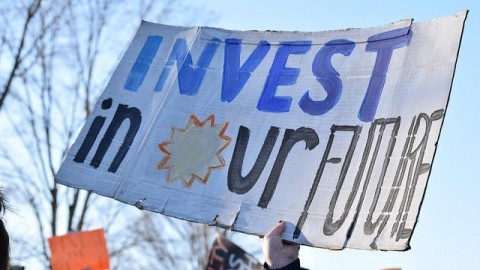 WORCESTER — The University of Massachusetts Board of Trustees met Wednesday morning to approve UMass divestment and discuss budgetary gaps for the next fiscal year. The meeting was attended by 50 activists who argued against UMass Boston’s recent dismissal of 400 faculty members and advocated for the trustees to adopt a system wide policy of divestment from fossil fuels.

“We serve this commonwealth richly, by educating our students and providing a safe and clean environment,” said Janelle Quarles, president of the UMass Boston Classified Staff Union. “In return for our service we ask for nothing more than a living wage, healthcare benefits and job security.”

Quarles said that UMass Boston is on a “privatization track.” The presidents of three other Massachusetts school unions also spoke at the board meeting, expressing similar sentiments.

“This is a discussion going on for a long time, they do this every year,” said J. Keith Motley, UMass Boston’s chancellor. “It’s in their contracts that we notify employees of whether or not we will rehire them in June,” he said, justifying his school’s decisions in response to a trustee’s criticism of their policies as “draconian.”

Protesters’ signs carried slogans such as “Invest in our future” and “If you had my teachers, you’d be smart enough to keep them.”

Some signs shared slogans with those carried by students in April from the sit-ins at UMass Amherst’s Whitmore administrative building, advocating for the University to divest from fossil fuels.. Hundreds of students participated in the sit-in, and 34 were arrested for trespassing. After the UMass foundation voted to approve a divestment policy in late May, the trustees approved it on Wednesday.

The trustees’ vote on divestment passed easily, with only one ‘nay’ and one abstention. Before the vote, Trustee Chair Victor Woolridge clarified that he had been misquoted as saying green energy might outperform fossil fuel investments and that he does not believe this to be the case.

“The data doesn’t say that green energy will outperform,” said Woolridge. “The foundation will be selling direct investments when it makes financial sense.”

Kristie Herman, a spokesperson and organizer for UMass Amherst’s student-led divestment campaign said projections have shown that divestment will have little negative effect on the UMass endowment.

Herman considers the decision to divest “more powerfully a political statement,” that will reach beyond immediate financial concerns.

Herman also said that it is not yet clear what this resolution means for the future of divestment at UMass. She said that it makes her hopeful, the intention is there, but a lot has been left ambiguous in the implementation of divestment.

“Divestment has dominated the conversation while I’ve been on the board,” said Emily O’Neil, UMass Amherst’s student trustee, after her last meeting with the board. O’Neil, unlike other student trustees, is allowed to vote on board issues.

O’Neil and Herman, both recent UMass graduates expressed concerns that the board of trustees did not have a schedule in place for divestment. Additionally, the university system’s definition of divestment currently means not further investing, rather than selling current direct holdings.

UMass has no plans to dispose of mutual funds invested in fossil fuels. According to O’Neil, an economics major, these shared investments are more difficult to sell.

Herman said that she appreciated how often students were cited as a key factor in the foundation’s decision to divest, and that the movement still has a lot of work to do moving forward.

“The school has really wanted to publicize this decision as a student-led initiative,” said O’Neil. “I think that’s really a publicity thing.”

One trustee called the board’s attention to a report from the Pioneer Institute and UMass President Marty Meehan’s rebuttal in a Boston Globe column.

The report argued that UMass admits too many out-of-state students, to the detriment of Massachusetts residents who may not qualify as admissions become more rigorous.

Meehan defended his schools from the criticism, and “won’t apologize for building up the Amherst campus,” in the words of columnist Kevin Cullen.

Faculty Staff Union President and Economics Professor Marlene Kim of UMass Boston shared concerns echoed in the report, that UMass schools were meant to be places where “disadvantaged students could get a degree,” but are increasingly inaccessible.

Among signs protesting fossil fuels and staff given notice, many were protesting tuition hikes and cancellations of staff pay raises.

“There are storm clouds gathering in the state house, and it’s not gonna be a pretty picture,” said Trustee Bob Epstein in response to protesters. “Don’t leave your fight on the sidewalk. There is no better influence than the power and presence of the union.”