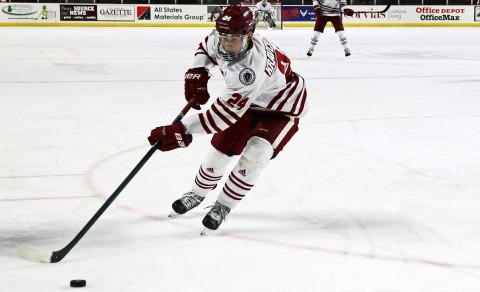 With many new faces joining the Massachusetts hockey team in recent months, a group of four Minutemen are heading out the door.

Dennis Kravchenko, Keith Burchett, Henry Dill and Maddison Smiley will not be returning to UMass for the 2016-17 season, according to Matt Vautour of the Daily Hampshire Gazette on Twitter Tuesday afternoon.

All four leave the Minutemen with two years of eligibility remaining.

This leaves new head coach Greg Carvel without two of the top three scorers from last season, as Walsh graduated in May.

Dill played in only seven games last season – a significant drop-off to the 25 he participated in a year earlier – collecting 160 saves and allowing a total of 22 goals, a goals against average of 4.38 per game.

Dill made 719 saves while allowing 106 goals during his two years with the Minutemen.

In his two seasons with UMass, Smiley scored two goals and four assists in a total of 51 games played.

Burchett collected a total of four goals and eight assists in 56 games for the Minutemen.

It is not known whether or not any of the former Minutemen will continue to play college hockey elsewhere.