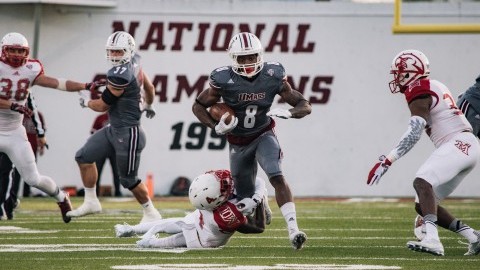 During the past two seasons with former quarterback Blake Frohnapfel lining up under center and former wide receiver Tajae Sharpe on the outside, the Massachusetts football team’s offense was predicated on the passing game.

UMass knew it, the fans knew it and its opponent’s most definitely knew it.

But with neither Frohnpfel nor Sharpe returning for the 2016 season, it’s time for the Minutemen to find a new identity on offense, and running back Marquis Young and his fellow backs plan to be a large part of that.

Despite battling temperatures in the mid-ninety’s during day two of training camp Tuesday, Young is just happy to be back on the field.

“It feels like life,” Young said. “We’ve been waiting for this day since the last game we played at (Buffalo), so it’s wonderful day.”

Young is coming off a strong freshman season where he ran for a team-high 960 yards on 152 carries for seven touchdowns. His 81.1 yards per game ranked sixth in the Mid-American Conference last season. He submitted his strongest performance in the season’s finale against Buffalo, where he rushed for 240 yards, becoming the first Minuteman to accomplish the milestone since Tommy Nelson (204) in 2008.

Young wants to take the next step in his game this season and to do that he watched other successful college running backs to help work on his own game.

“I really just watched people from other divisions, people in the SEC, people like Dalvin Cook (Florida State) and Christian McCaffrey (Stanford),” he said. “I watched their game, how they run between the tackles, and watch how they run on the second level. I watched a lot of film from last year, so I’m trying to get better running between the tackles and blocking.”

Fellow sophomore Sekai Lindsay is also expected to carry a major load in the running game this season. Lindsay appeared in six games in 2015 before suffering a season-ending injury, totaling 114 yards and a touchdown. Lindsay and Young split first team reps during Tuesday’s practice.

Young is excited for the two to have a major role within the offense this season and believes their contrast of styles will help the team succeed. Young is known for his speed, while Lindsey is known for being the team’s power back.

UMass coach Mark Whipple has been impressed with the progression of the two backs during the offseason and the early days of camp.

“Marquis has really grown up a lot since last year. We know what Marquis can do,” Whipple said. “Sekai played last year and he’s coming off a broken ankle and has had a good two days of practice, so we are really excited for what we have in them.”

Joining Young and Lindsay in the backfield will be fullbacks John Robinson-Woodgett (previously a linebacker) and Andrew Libby, along with a trio of freshman running backs, Bilal Ally, Peytton Pickett and Tyshaun Ingram.

“Peytton graduated midyear, so he was here in May and Bilal was here. Both those guys are talented guys and they’re getting reps,” Whipple said. “We’re just trying to do some different things. We’ve got a lot of young guys that we’re trying to get reps and see where they’re at.”

With team needing to find out what it’s identity on offense will be, it will be important for everyone to fill their role. Young believes that will be key for the Minutemen to find success in 2016.