UMass Dining looks ahead after number one ranking in Princeton Review 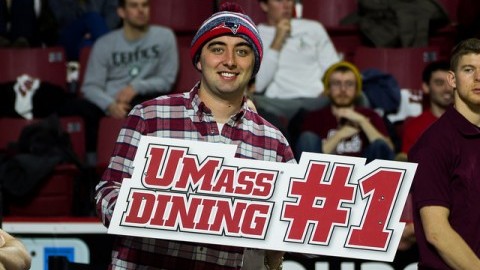 University of Massachusetts’ Dining Services were selected as the best in the country, based on students’ responses to Princeton Review surveys. Separate from the Princeton Review, UMass surveys students each semester to understand what they want from on-campus food options.

“Every year we have higher standards for classes of entering students, so it makes sense that we would continue to raise the bar for dining,” said Director of Residential Dining and Sustainability Garett DiStefano. “There’s a clear link between students’ diets and their academic performance.”

UMass has been steadily rising as one of the Princeton Review’s top dining colleges in the last four years. In 2012, the university was ranked tenth, but has been in the top three since 2013. This is the first year UMass has been ranked number one.

DiStefano said that a big part of this change has been bringing in guest speakers to help managers of dining services understand how to better appeal to students. One such guest was June Jo Lee, a food ethnographer who specializes in creating “strategic frameworks” which food industry clients can use to improve their businesses.

“She taught us that time is the student’s most important asset. That motivated us to make food more accessible to the students’ schedule,” said DiStefano.

Other famous speakers like Alice Waters and Michael Pollan have helped the university’s dining services to expand with food trucks, delivery and to find a variety of ways to attract students to on-campus food options.

UMass dining services have been working to expand the diversity of the foods available to students. As the university has grown to accept more international students, Toong said he has tried to increase the diversity of options through Blue Wall and integrating more international cuisine in the dining commons. In the future he is planning to add more Mediterranean and Korean food.

“Last year was already good,” said Mingfei Zhao, a graduate student of Epidemiology. “I don’t know how they could make it better.” Zhao said she primarily eats at Blue Wall, she mostly wants Chinese food and likes her options.

“This ranking is also a tribute to our students, whose high expectations drive our team to excel,” said Toong.

A variety of student groups and individuals on campus have pushed for UMass dining to eliminate the use of antibiotic-treated meats, and to source meat and vegetables from more local and humane farms.

DiStefano says that 80 percent of the meat dining services serves is humane, and 76 percent is local. He also reports that 90 percent of UMass students say they eat more fruit and veggies than they did before eating in the dining halls.

Dining services’ surveys have found that 70 percent of students said that food was an important factor in choosing UMass.

“We’ve been engaging with students to build co-curricular learning about food and the environment,” said DiStefano.

One of DiStefano’s major efforts working under Toong has been to reduce waste by dining services with the lean path program, which weighs discarded food to understand how the kitchens can prepare food in a more efficient way. According to both men, the program saved dining services $750,000 last year.

Dining services has put in effort the last few years to demonstrate awareness of waste, encourage students to take just as much food as needed and decrease the use of disposable containers.

Dining services has a policy of not letting anyone go hungry, DiStefano said, regardless of whether they are out of meal swipes.

“A lot of times if I forget my wallet but they still let me in,” said Walker Raber, a BDIC major. “I hadn’t realized that was just how things worked.”

However, Raber criticized the way meal swipes are priced.

“The university can use the fact that students are here and on meal plan to price gouge,” Raber – a senior studying plant, soil, and insect science with a focus on food systems’ sustainability – said. “I don’t usually eat here because I could go downtown and pay less than the nine dollars for dinner.”

“Our employees work tremendously hard, and take so much pride in their work,” said DiStefano.

“We all wanted number one so bad, every staff has worked harder to better serve,” added Toong.