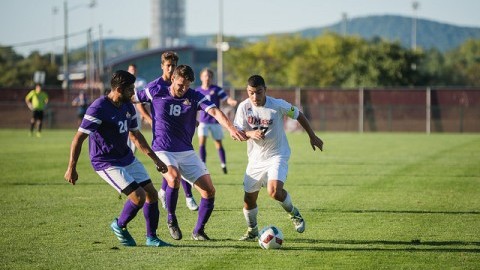 With just under 30 seconds to play in a tightly contested 1-1 game, it looked certain the University of Massachusetts men’s soccer team was headed to overtime. Carlos Clark and the Albany Great Danes had different plans. He scored a header off a corner kick to derail a Minutemen (0-5-1) upset.

UMass head coach Fran O’Leary went into the game knowing the Minutemen needed to defend set pieces well in order to emerge victorious. The team was able to stop the first four corner kicks with ease, and blocked a free kick from around 25 yards out that was sent directly into the wall of UMass defenders. All the improvement will be overlooked by the final goal, though. O’Leary knows his team must continue focusing on defending against free kicks going forward.

“We defended well on set pieces except for the last one and that was the one that counted,” O’Leary said after the game. “We failed to defend our box, and it cost us the game.”

O’Leary was proud of the way his team competed throughout the contest, and the way they defended free kicks early in the game.

“I thought we played very well today,” he said. “(Albany’s) chalk-full of experienced international players so we gave it as good as we had throughout the game.”

Sophomore defenseman Konrad Gorich said the team defended free kicks through yesterday’s practice and was disappointed with the results. He knows his team will continue to try and improve in this area by working on it in practice and will only get better going forward.

“We stayed focused on good shots and making good corners and I think we did that well and we will keep working on that,” Gorich said.

While the set piece was what lost the Minutemen the game, the defense was stout throughout, holding strong against a fierce Albany attack. The Great Danes kept UMass goaltender Jorge Becerra on his toes throughout the contest, launching 13 shots in his direction. Becerra made three saves: two in the first half and one in the second.

“For the most part we gave up two silly goals but we defended vigorously,” O’Leary said. “It’s a funny game, you can defend well for 89 minutes but if you have one lapse, these things happen. Overall I was very pleased with our team.”

The Minutemen held Albany (2-2-1). UMass went into halftime with a 1-0 lead, but saw it vanish in the 62nd minute when Afonso Pinheiro was able to dodge a charging Becerra away from the net to narrowly slip it by him and put the ball in the back of the net. Albany had multiple chances in the second half to take the lead, but could not buy a goal.

O’Leary hopes his team can cut out “silly mental mistakes” and continue to show improvement going forward. He has a young group that he hopes will learn and move on from this and hopes the team can continue playing the way they did today.

“We have to keep working on defending the box on our set pieces but overall—to man to goalkeeper to forwards—I thought it was a courageous performance against a very talented team,” he said. “We’ll take a day off, dust ourselves off and get ready for the next one.”

UMass will return to action Saturday as Brown visits Rudd Field at 4 p.m.