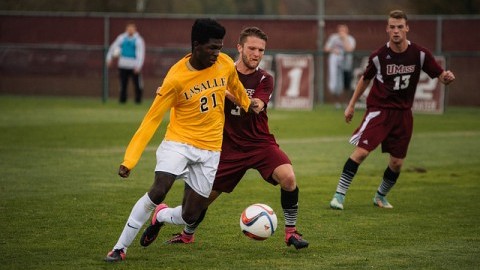 It took 59 minutes to break a scoreless tie, but it was the Duquesne men’s soccer team that finally found the back of the net as the Dukes (5-2) topped Robert Morris (3-4) 1-0 Friday night in Pittsburgh.  Junior midfielder Frederik Borenstein scored on the play as he was able to beat his defender with a spin and kicked the ball past the goalkeeper.

The goal was Borenstein’s third of the season. Duquesne will be looking for the Norwegian to continue producing offensively going forward, as he leads the Dukes in goals and points. The goal was assisted by juniors George Poppas and Nigel Seidu. It was both of their first points of the young season.

Duquesne was strong defensively, only allowing the Colonials to get two shots on goal. This has been a pattern throughout their four-game winning streak as they have only allowed one goal over that stretch.

With the win, the Dukes remain undefeated at home and they will look to keep that up that strong play as they ready to face Navy on Tuesday.

In a battle between two Rhode Island squads, it was the Brown men’s soccer team that topped Rhode Island 2-1 in overtime on Saturday. Sophomore Matthew Chow scored the game-winner in the 93rd minute for the Bears (4-3), netting his second goal of the game.

Chow’s early goal in the 15th minute was matched by a 39th-minute corner-kick header from URI (3-5-1) senior captain Wesley Matthews. The teams went back and forth until the overtime goal that left the Rams fans disappointed.

URI has lost its last four games, and have one more game to work out their issues before conference play commences. The Ram’s main issue has been creating offense as they haven’t scored over one goal in their past eight matches. They will look to reverse that trend on Tuesday when they play Bryant on the road.

La Salle loses a tight one to UMBC

The La Salle men’s soccer team was hoping to burst into conference play with a wave of momentum but the University of Maryland, Baltimore Country had other plans Saturday. Retrievers (4-1-3) sophomore midfielder Patrick Jean-Gilles scored the game-winner in overtime to secure a 2-1 win for UMBC.

The Explorers’ senior defender Colman Kennedy scored in the 72nd minute to knot it up and force overtime but La Salle (5-4) could not push one past the keeper.

The game was evenly-matched throughout as the teams were separated by just one in goals and saves on the night.

The Explorers have a week break before starting their Atlantic 10 slate at home against Saint Louis.

Samuel Shulman can be reached at [email protected]