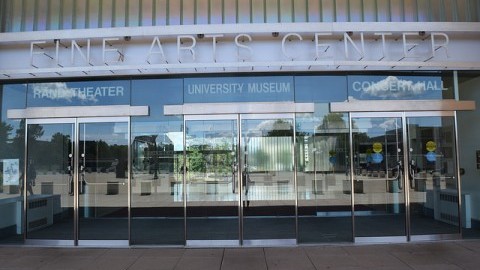 Given the copious amount of venues and performance spaces throughout the Pioneer Valley, University of Massachusetts students can be forgiven for sometimes forgetting that there is an abundance of concerts, in a dizzying variety of genres, in their own backyard.

On Tuesday, Sept. 27, the FAC will play host to critically acclaimed jazz legends Wadada Leo Smith and Vijay Iyer, who will be performing as a duo, and on Wednesday, Oct. 5, Japanese artist and dancer Takao Kawaguchi will perform some of the most celebrated works of Butoh dancer Kazuo Ohno.

The season will take on a different tone on Thursday, Oct. 6, when Los Angeles dance company Contra-Tiempo performs its show “Agua Furiosa.” Inspired by Shakespeare’s “The Tempest,” “Agua Furiosa” is a show designed to highlight the issue of race relations in America through dance.

“Othello in the Seraglio: The Tragedy of Sümbül the Black Eunuch,” an opera set in the Ottoman Court in the 17th century, will be performed on Friday, Oct. 14 in Bowker Auditorium in Stockbridge Hall. World music star Mariza will take the stage at the FAC on Thursday, Oct. 20.

Classical fans may note the upcoming performance of the Warsaw Philharmonic Orchestra on Sunday, Oct. 30, while jazz fans will likely be interested in the Marcus Roberts Trio performance on Thursday, Nov. 3.

This is just a portion of the performances occurring at the Fine Arts Center over the course of this semester, and tickets for each of them are available at heavily discounted prices for both UMass and Five College students.

The Fine Arts Center, alongside these performances in its concert and recital halls, will show visual art exhibits like “Human Animals: The Art of Cobra and Its Legacy,” an exhibition – curated by UMass Art History Assistant Professor Karen Kurczynski – examines the trans-national, avant-garde CoBrA movement in post-World War II Europe.

The FAC is also sponsoring a series of visual art exhibitions throughout the semester at the Augusta Savage Gallery in the New Africa House on campus. These include “About Face,” a gallery of portraits on display between Sept. 12 and Sept. 28, and “The Lotus in the Mud,” an Erika Radich exhibit featuring works inspired by the destruction of the devastating earthquake that struck Kathmandu, Nepal, in April 2015.

Returning to the stage, the UMass department of theater is also gearing up for a fascinating season. The department will be performing an adaptation of Moliére’s “The Misanthrope” at the Rand Theater from mid to late-October and “Refugee,” a musical written by Milan Dragicevich, at the Curtain Theater from late-November to early-December.

Though the Mullins Center may be known to most UMass students as the place to mercilessly taunt visiting hockey teams, it does play host to the occasional concert. On the docket at Mullins this semester is another visit from MANIA Circus. This event, which used to be known as Fantazia, is a multimedia extravaganza featuring electronic music, acrobatics and intense choreography. It will be arriving at the Mullins Center on Saturday, Sep. 24.

The one thing tying all of these vastly different performances and displays together is that each and every one of them will be directly on campus. Though many of them may not jump out at first glance, each one has heavily discounted tickets for students, so your curiosity won’t come at a steep cost.