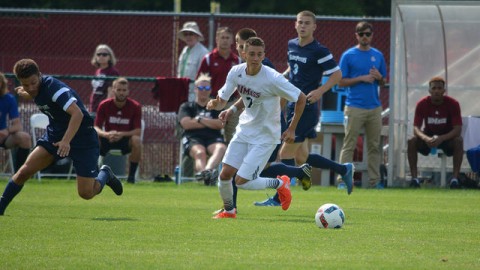 Alex DeSantis does not bring much attention to himself. His 5-foot-11, 150-pound frame will not outsize many opposing players, and his soft-spoken manner leaves him as one of the quieter ones on the pitch.

However, in nine games he has become arguably the Massachusetts men’s soccer team’s best player this season.

DeSantis has tallied two goals–tied with Ty Goncalves for most on the team–and four assists earning him a team-leading eight points. He has started in all nine games this season and has played a total of 572 minutes.

It has not always been this way though. DeSantis totaled only one goal in his previous two seasons in which he started in only 11 games.

“He always was a player with ability, but he maybe lacked the stamina and the strength to compete consistently at the collegiate level,” O’Leary said.

As a senior at Belchertown High School, DeSantis was named the Daily Hampshire Gazette’s boy’s player of the year.

The now-college junior entered the 2016 season in better shape and with more confidence.

“I was running a lot and working out,” DeSantis said. “The main focus for me last spring was to get more composed on the ball and be more dangerous with it, I really focused on that over the summer.”

The improvement in his fitness and overall confidence has yielded success, which has therefore yielded much more playing time.

“Now with the work he’s done with his intrinsic motivation, he’s just so important,” O’Leary said. “He’s one of the first guys on the team sheet every game.”

DeSantis’ value exceeds far beyond his ability to score goals. His four assists lead the Minutemen and place him near the top of the Atlantic 10 rankings. In each of UMass’ previous three matches, where it is 2-1 and averaging 2.3 goals per game, DeSantis has either recorded an assist or scored a goal in each contest.

Though listed as a forward on the team roster, DeSantis has proven that he can play well on both sides of the ball.

“He has a goal in him obviously and the stats tell you he can score a goal and he can create a goal, so they are all really good things to have,” O’Leary said. “And on top of that, given his energy and fitness levels, he is able to hold his own on the defensive end.”

DeSantis’ ability to be a good all-around player allows O’Leary to confidently use him in multiple in-game situations.

“Yeah, we trust him implicitly because he’s done it,” O’Leary said. “You earn trust and just his performance level every day at practice, everyday at games, you just grow that trust a lot.”

Being a junior and one of the few upper classmen on the UMass roster, DeSantis has embraced the roll of being a leader. Though he has decided to lead more by example.

“I’m not really a loud guy, I don’t yell that much, I just do the work I’m supposed to do and I think people really follow from that,” DeSantis said.

For O’Leary, DeSantis has been an example to younger players of the value of hard work.

“The world is full of talkers. He is a doer. He just does,” O’Leary said. “For the amount of young guys, I’ve used him as a reference point. Maybe you’re not on the team right now, you’re not in the picture, and you’re young and developing. Well, so was Alex not too long ago. He just quietly gets on and does his thing game in and game out. I’ve always preferred a doer to a talker.”