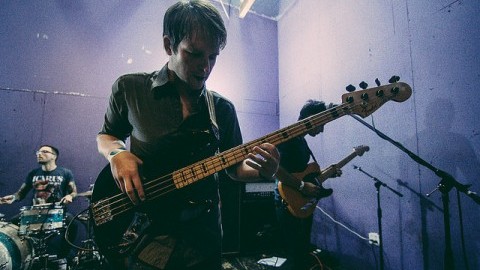 For music of every genre, the art of creating an emotional aesthetic that strikes the right balance between musical impact and lyrical poignancy is a challenge for musicians.

Sticking too closely to one side of the equation can often leave the other feeling inadequate, and often makes the resulting music feel lopsided. Albums built around particular thematic elements, or “concept albums,” have been known for decades as a solution to the difficulty of finding this balance.

By creating a parallel theme in message and music, these sorts of records strike the balance between these ideals. A recent explosion of the usage of concept albums in the post-hardcore genre, such as A Lot Like Birds’ haunting exploration of home life in “No Place” and the epic, decade-spanning narrative of The Dear Hunter’s “Act” albums have shown that concept albums are as relevant now as they have ever been.

One of the long-standing greats of post-hardcore, Artifex Pereo, has returned from its previous narrative in 2014’s “Time in Place” to present new societal reflections. Spun with precise, relentless emotion from the otherworldly perspective of outside visitors looking in, the band’s new album, “Passengers,” bridges a myriad of societal shortcomings with shattering punchiness.

As a result of this, and some brilliantly versatile instrumentation, the formation of every sound acts as an extension of the fire behind each song. “Passengers,” released Sept. 9, absolutely drips with a darkness that’s both sanguine and resolute, and strikes a divine balance in the band’s aesthetic.

The lyrical connections weaved into the structure of the album’s songs have the elegant twist of a skillful novel, as seen in one of the better moments on the album, “Enterprise of Empire.” While I have conflicting thoughts about how effectively the message of the song was delivered, the end of the track took me by overwhelming surprise and filled me with the apprehension of a deer staring into its terminal headlights.

The breakdown of the song is awe-inspiring, the chilling vocal passage inscribed into my mind, sure to be sung and screamed for the next hour at least. The most intense moments of “Passengers,” like that breakdown and the showcase of hectic, blood-boiling emotion at the end of “Paper Ruled All,” are moments that can dominate your thoughts for a long time.

Then there’s the sweet, intoxicating blend of instruments on “Passengers.” It’s tactful, always moving somewhere and bursting with the diversity Artifex Pereo has always shown.

The instrumentation of “Passengers” is filled with moments and sounds that can feel off to the listener. Guitar licks can gurgle and hiss like unfamiliar creatures, while strange chimes that display the otherworldly aspect of “Passengers”’ narrative often shine through.

Each member’s command of the technical aspects of their instruments works so fluidly with the feeling of the band’s message that the accompanying musicality feels like a seamless transition to language, where every detail of the band’s larger-than-Earth commentary is translated with dazzling clarity.

It is as if “Passengers” is redefining the idea of language all in itself through the interplay between lyrics and sound.

Overall, “Passengers” features some of the most potent societal criticism I’ve seen in music. The messages never feel tired or peachy, but instead compel me further into the heart of Artifex Pereo’s purpose as a group.

Fitzgerald Pucci can be reached at [email protected]