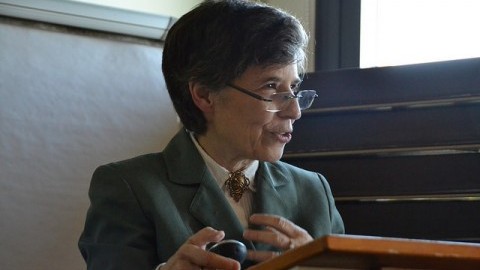 Anthropologist Caroline Brettell, a professor at Southern Methodist University, presented the lecture “Gender and Migration of U.S. Immigration policies” on Tuesday, Sept. 27 in the Campus Center. In her lecture, hosted by the department of anthropology, she talked about the relationship between gender and the causes and consequences of migration.

Brettell began the lecture by introducing a story about a woman from India whose husband worked in Texas, went back to India to marry her, and brought her back to the United States. Although the woman was educated in the U.S., she was unable to continue working due to her visa status.

Required to start over, the woman went to classes at the local community college. She succeeded in getting a job, and a green card along with her husband, but stopped shortly after the birth of her child.

Brettell also spoke about how different genders played a role in the United States’ immigration policies. For example, the Page Act of 1875 restricted the immigration of Chinese women. “Men’s efforts to bring their wives to the U.S. were generally met with hostility,” added Brettell.

Brettell tied in the recent presidential debate and her disapproval of the symbolism of the wall that Trump proposes to make Mexicans build along the border of the U.S. and Mexico. After Brettell’s lecture, she opened up questions and comments from the audience.

Emiliana Cruz, a member of the audience and an assistant professor of anthropology, asked how much revenue the U.S. Embassies make in regard to visa requests. Brettell responded that she has “never seen anything” relating to that issue. Brettell did say that many undocumented immigrants come into the U.S. with a tourist visa, but they overstay that visa, presumably because the U.S. is so restrictive when it comes to giving out work visas, green cards, and citizenships.

Tuesday night’s event was part of the Social Science Matters series from the College of Social and Behavioral Sciences. Brettell presented her lecture as part of this year’s series theme, “Perspectives on Migration.”

Megha Srinivasan can be reached at [email protected]