Bridging the divide between eastern and western Massachusetts 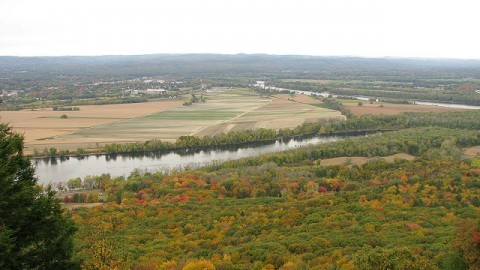 Coming from a freshman straight of out the Boston metropolitan area, western Massachusetts is a very different place. It goes beyond the unrecognizable, mountainous geography and the inland climate, which, despite its New England tinge, is a bit more intense and a bit less unpredictable.

Herein lies the true culture shock: The people who live here are nowhere near Boston, the economic and political center of the Commonwealth.

Eighty percent of Massachusetts’s citizens live in the metro area of Boston, which consists of Greater Boston, Cape Ann, many of the suburbs leading up to Worcester and towns and cities as far south as Plymouth. For those 80 percent, their tax dollars for the Massachusetts Bay Transit Authority and commuter rail, polished cities and a busy Logan Airport make sense and benefit the people living there. But what about the remaining 20 percent?

Ferraro, who has taught in western Massachusetts for years, has observed the negative impact of Boston projects like “The Big Dig” on the development and infrastructure of the state west of I-495. “There are many communities in Massachusetts that do not even have broadband internet connections,” he said.

Springfield, which has a median household income of $34,731, is the largest urban center in western Massachusetts. Once a booming economic center on the Connecticut River, the city declined after the closing of the Springfield Armory in 1968 and many business firms, suffering years without sufficient funds to improve the infrastructure.

Some argue its condition is dramatized by bad press, but this assurance dismisses the city’s condition relative to Boston and its suburbs. Springfield is among the lowest percentile of wealthy school districts and is combating surges of crime. Yet the only “help” Springfield is receiving is the development of a $950 million project to build a casino downtown, which will surely prey on the city with a 30.1 percent poverty rate.

Where is the taxpayer’s money for Springfield and the counties west of Worcester going?

The money is difficult to track, but we know that $7.1 billion in taxes goes toward transportation, which is largely focused on Boston projects, and another $26 billion goes toward education which, due to an out-of-date Chapter 70 formula for state funding that uses arbitrary measurements to determine how much aid schools get, clearly puts the wealthier towns around Boston at a relative advantage.

What if western Massachusetts attempted to secede as Maine did in 1820? The idea of a western succession is nearly implausible in an age of bigger and wild national problems. But before that question is attempted, it is necessary to look at what this state would look like.

A state comprised of Hampden, Berkshire, Hampshire and Franklin counties would house around 830,000 people, according to the last census. That’s a small state, but not the smallest; it would be more populous than the state of Alaska, which has 738,432 residents and just shy of South Dakota, home to 858,469 people. Contrary to common belief, this state would be just as, if not more, liberal than its eastern counterpart. According to voter registration statistics, Hampshire and Hampden counties have the most Democrats per capita outside of Suffolk County, which encompasses Boston.  Young people would have considerable power over state politics if they register to vote in this theoretical new state.

The real question is how western Massachusetts would sustain itself, and that can be difficult to ascertain. Assuming western Massachusetts retains control of the Quabbin Reservoir, which supplies 206 million gallons of water a day, combined with its agricultural advantage, it would be able to redistribute tax money toward its own infrastructure rather than subsidizing Boston projects. However, there has not been much research on the matter.

Such a maneuver would obviously be dramatic. But what about moving the state house? States like New York have different political and economic capitals, arguably creating a check on the government to balance the needs of other parts of the state without bias. Today, the governor of Massachusetts is a short walk away from the mayor of Boston, and to some extent, they are mutually accountable and directly influenced by each other’s actions. They are also far more likely to chat about the agenda over a cup of coffee than the mayors of Springfield or Worcester.

But Ferraro calls this solution a “band-aid,” citing Brazil’s attempt to make the nation less Rio de Janeiro-centric with its creation of Brasilia. “We need the Massachusetts House of Representatives to present a clear tally of per capita tax burdens and per capita tax benefits broken down by community and to have that information published,” Ferraro said.

At the moment, we do not know if any of these drastic measures are supported by a plurality of western Massachusetts citizens, but nevertheless having more transparent tax information would allow a new statewide debate about regional equality that is sorely needed; not just for the sake of western Massachusetts but other hurting regions like Worcester, Lawrence, the Malden-Everett region north of Boston and more.

I know the burden of waiting behind the yellow lines in the city and wondering why my tax dollars are being spent on slow trains and long waiting times. I can only imagine that frustration coming from someone who is doing the same, without a ride home to show for it.

James Mazarakis can be reached at [email protected]