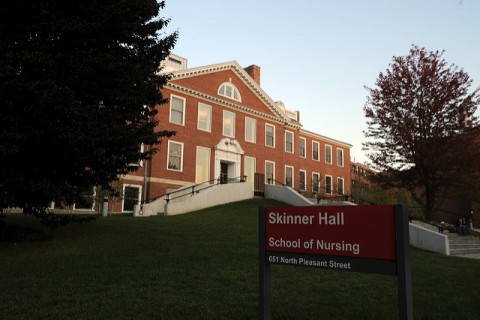 With the Commonwealth in an opioid “crisis” according to the state’s Department of Public Health, the University of Massachusetts’ College of Nursing is aiming to do something about it.

A July press release from the University announced that the U.S. Department of Health and Human Services awarded the College an $870,000 grant to train student nurses in screening, brief intervention and referral to treatment (SBIRT). This training, funded by the Substance Abuse Mental Health Services Administration (SAMHSA) Center for Substance Abuse Treatment, is meant to target alcohol and substance abuse.

“One of the reasons (UMass was) attractive is that we’re from a state, and in the proposal we made a point of underlining this, that has a serious problem with alcohol and substance abuse—we’re dealing with a kind of crisis here,” Donna Zucker, associate dean for academic affairs for the College of Nursing and principal investigator for the SBIRT program, said. “If we can educate providers (of care)…then that is a really great opportunity to meet a need in the Commonwealth.”

According to Zucker, SBIRT will officially go live in September and will train students in skills that providers of care would use when they are taking a client’s history or conducting a follow-up meeting with a high-risk patient.

She explained that “brief intervention” deals with how to interview someone about alcohol and substance use, adding that nurses “want to have a sense of collaboration” with clients.

One technique nurses will be trained in is known as motivational interviewing. Zucker said this requires building a rapport with a client while also calling out dangerous or unhealthy behavior such as excessive drinking.

Sally Linowski, associate dean for student affairs and campus life, is serving as the program’s co-investigator and explained that in motivational interviewing, nurses “meet the person where they are.”

She said student nurses will learn how to guide conversations about alcohol and substance abuse even when people seem resistant.

Linowski described herself as a “health promotion person” who has always been interested in why people use drugs and alcohol and, more importantly, how to help them.

She said lessons learned from her role in bringing the BASICs program, an alcohol screening and intervention system, to campus taught her that “with an evidence-based practice, you really have to stay with fidelity to the model.” The SBIRT program will rely on the curriculum already developed by SAMHSA.

However, she added, you can tailor your conversations to your institution.

500 students will be trained through the program over the course of three years through the program, Zucker said. The nursing students will be working with patients through the Western Massachusetts Public Health Training Center, the Center for Health Promotion, University Health Services and the Springfield Public Schools. No new classes have been developed as a result of the grant. Instead, the training will be incorporated into pre-existing courses already required by the nursing major.

The program will be overseen by a panel of students called the Student Advisory Committee. According to Zucker, those students will receive appointments once the semester gets started. SBIRT’s Council of Directors will be composed of members of the community including mental health and substance abuse experts.

Christina DiConza, a sophomore nursing student, said she looks forward to this new training she will undergo as a junior next year.

In an email to the Daily Collegian, she wrote that “Prescription drug addiction and opioid abuse have become highly prevalent and problematic in today’s world. If I, as a future healthcare provider, can in any way work to minimize the epidemic, I am thrilled to be able to do so.”

She added that this training will give her an edge post-graduation, saying, “This type of training will provide me with an advantage while looking for a job, as it will be something that sets me apart from other applicants. However, more importantly, it will enable me to approach patient care scenarios with an un-stigmatized, informed attitude toward drug addiction.”

Linowski echoed this sentiment saying that UMass nurses will be attractive to employers who won’t have to train them in SBIRT, which is considered best practice under the Affordable Care Act and used in hospitals such as Baystate Medical Center in Springfield.

DiConza added that she sees nurses as playing an important role in the opioid crisis.

“Part of the reason I decided to become a nurse was because I find them to be accessible, approachable health care personnel. Nurses work in numerous environments, allowing them to reach out to a diverse spectrum of people,” she said.

Zucker expressed a similar view saying that this kind of intervention training falls well within nurses’ scope of practice.

Zucker, who is an addiction specialist herself and conducts research in corrections, had a personal motivation to study prevention and promote prevention training among her students having seen the debilitating effects of addiction on individuals and communities first hand.

“If you can prevent people from going down the path of substance abuse, it’s a lot easier and more beneficial than dealing with the long road of rehabilitation,” she said.