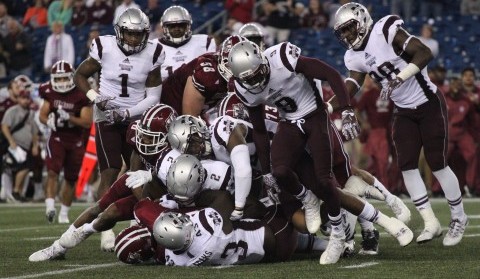 FOXBORO –– Stop me if you’ve heard this before.

The Massachusetts football team played well for brief stretches against a heavily-favored and more talented team, only to fall short in the second half thanks to heavy legs and self-inflicted wounds sprinkled throughout the 60-minute contest.

For a half, and even brief stretches in the third and fourth quarters, UMass (1-3) hung around with – and looked good – against Mississippi State. But once again, a poor third quarter derailed any sort of upset at Gillette Stadium with the Minutemen falling 47-35.

“Credit (Mississippi State). That’s why they’re in the SEC. They’re just bigger and faster,” UMass coach Mark Whipple said after the game. “Our guys competed right with them, just made too many mistakes on both sides of the ball.”

UMass found itself in a position to win the game after quarterback Andrew Ford – making his second consecutive start – drove the Minutemen 88 yards on nine plays cumulating in a 19-yard touchdown pass to Sadiq Palmer to make it 41-35 with 4:59 to play.

Needing one more stop to give UMass a chance to pull off the upset, MSU carved apart the Minutemen defense – capped off by a 12-yard touchdown run from Ashton Shumpert to make it a two-possession game.

“We just needed to make one stop or one turnover to really get the momentum our way and credit them. We just couldn’t get it,” Whipple said.

The Bulldogs outscored UMass 28-7 in the third quarter thanks to a pair of touchdown passes from Nick Fitzgerald, a 16-yard touchdown run courtesy of Aeris Williams and a pick-six from Jamoral Graham. In 2016, the Minutemen have been outscored by their opponents 122-35.

“The main thing was we made too many mistakes. And that goes back to our preparation,” linebacker Steve Casali said. “We made those same mistakes during practice. So the main focus this week going into practice is doing your job and we’ll be all right.”

One of UMass’ biggest and most critical mistakes came at the start of the second quarter when a botched snap negated what would have been a 37-yard field goal attempt from Logan Laurent. Instead, the Bulldogs (2-2, 1-1 Southeastern Conference) marched down the field and scored three points of their own thanks to a 30-yard field goal from Westin Graves.

Whipple credited both the Minutemen’s numerous missed tackles and MSU’s first-half two-minute drill as some of the biggest factors in the loss.

“They’re faster. They’re the SEC West. We don’t talk to those guys and they don’t talk to us, recruiting wise,” Whipple said. “Our guys battled. They got big, fast guys. They’re like Florida. That’s why they’re in that league.”

Whipple added: “It’s hard to get into a shootout with these kinds of teams. They just have more … I’m proud of them. There was a lot more good than bad.”

The Minutemen held the lead for the majority of the first half after Marquis Young broke off an 83-yard touchdown run to give them a 7-3 advantage. UMass later extended its lead to 14-6 after Jalen Williams caught the first of his two touchdowns passes with 1:48 remaining in the second quarter.

“We’re definitely going in the right direction,” Ford said, who finished 24-for-40 with 273 passing yards, four touchdowns and three interceptions. “This is the second SEC team now that we were in it against in the fourth. No moral victories, but we’ll watch the tape tomorrow and build off of it.

“I didn’t think there was any point on the sideline that our guys dropped their head and thought we were going to lose,” Whipple said. “It was quickly on the pick six, but they’re right back at it.”

“They’re good to be around and we’re just going to keep getting better.”