Cyr: With external expectations at an all-time low, UMass football needs to give the fans a reason to invest in the future 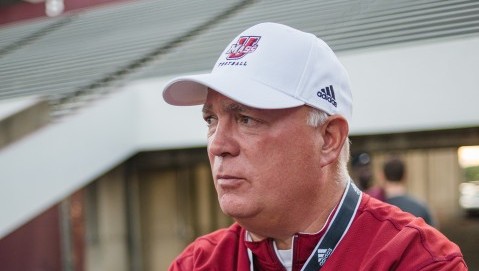 Last year was supposed to be the year.

Coming off of a 3-9 record in 2014 in Massachusetts football coach Mark Whipple’s return season at UMass, with a core group of returning seniors and a somewhat favorable schedule, 2015 had all the makings to be the year the Minutemen turned the corner in the Football Bowl Subdivision.

Former quarterback Blake Frohnapfel was returning for his second and final season at UMass, after turning heads with a 3,345-yard, 23-touchdown performance in 2014. USA Today even deemed Frohnapfel “the best quarterback you’ve never heard of.”

Heck, just last year I wrote how the Minutemen were destined for a bowl game in 2015.

None of that happened. Reality set back in, and UMass found itself once again 3-9 for the second straight season, and 8-40 overall since the jump to FBS since 2012.

So how does that relate to the 2016 Minutemen?

Well, you see, anyone who’s followed this team closely over the past few years knows one thing: You never know what to expect with UMass football. And it usually doesn’t end well for the Minutemen, or their fans.

The future is even murkier for football in the Pioneer Valley with UMass leaving the Mid-American Conference and now is one of only four Independent teams in FBS. Only time will tell how long the Minutemen can survive as an independent, and they don’t exactly have the resume to jump in the fast-pass lane with the other teams vying to join major conferences.

But before anyone can begin to discuss a new conference for UMass, we need to go back to last Saturday’s game against at the time-No. 25 Florida down in Ben Hill Griffin Stadium, or as most people call it, “the Swamp.”

Not many people expected the Minutemen to pull of the upset against the 37-point favored Gators. But what we did see was stunning.

“We had a chance. There were 10 minutes, 11 minutes to go in the game and we’re only down three,” Whipple said on his weekly conference call. “We certainly would have taken that. I would have been pleased with that.”

Whether Whipple realized it or not, he hit the nail on the head to describe the Minutemen’s upcoming season: Be competitive.

Unlike last year, no one is expecting big things from UMass in 2016. In fact, many of the major media outlets are barely giving the Minutemen a shot at all.

CBS Sports, Campus Insiders and the Washington Post all ranked the Minutemen 128th out of 128 total FBS teams. ESPN.com FBI has UMass ranked the highest at 123rd, with Phil Steele and Fox Sports each ranking the Minutemen 125rd. USA Today ranks the Minutemen at No. 127, ahead of only Charlotte.

Which is exactly why UMass’ performance against Florida means so much to the program, and its fans. No one is giving the Minutemen any shot, but if they can compete in games against better competition, and maybe even win a few games here and there, it will go a long way.

There’s a lot of young talent on this team. Ross Comis and Marquis Young have solidified themselves as two of the biggest playmakers on offense, while sophomore Andy Isabella already showing signs of promise as Whipple gives him a bigger role in the offense.

Defensively, the Minutemen look faster and more aggressive than in years past and it was on display in Gainesville. Teddy Lowery, Shane Huber, Steve Casali and Da’Sean Downey all looked solid at linebacker against the Gators in the opener. With a deeper and bigger defensive line, and the pair of sophomore cornerbacks in James Allen and Lee Moses, UMass’ defense is building for the future with a mixture of veteran leadership.

UMass football’s win-loss record probably won’t ‘wow’ anyone in 2016, but if it wants to remain relevant for the future, the Minutemen’s young core needs to give the fans something to look forward too.