DaLuz: Will college football make it to the New England big stage? 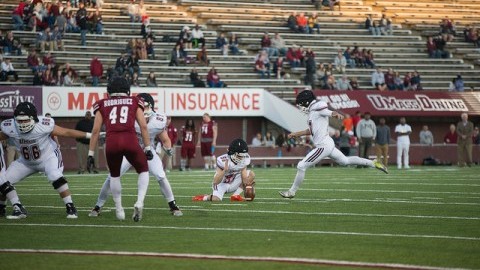 There has long been a wait for college football in Massachusetts—or anywhere in New England—to have a seat at the table with the professional teams of the region.

If you turn on Comcast SportsNet or NESN, or tune into WEEI or 98.5 the Sports Hub, you won’t find much chatter about your Massachusetts football team, Boston College or Harvard.

The desire and appetite for it is just not there, it would appear.

The Patriots, Red Sox, Bruins and Celtics have dominated the region since the turn of the century.

With the Patriots, Tom Brady and Bill Belichick absorbing so much of the football attention in town, it’s tough to make a case for the Minutemen.

There hasn’t really been much of an effort to change that narrative.

UMass athletic director Ryan Bamford has ramped up his effort to draw attention to his football program. The University and the athletics program started a ‘Unite the Masses’ campaign to try and aid the Commonwealth in coming together to support its flagship campus football team.

Signs are seen all over campus. McGuirk Stadium is coated with banners calling on the student body and state to rally around its state university football program.

Minutemen coach Mark Whipple is even getting in on the action. Whipple went on ‘Zolak and Bertrand’, the midday show on 98.5 the Sports Hub, last week to spread the word about his program and answer questions about his team heading into 2016.

There’s been an even stronger advertising push for what is essentially UMass’ game of the year this Saturday when they host Boston College at Gillette. The ‘Battle of the Bay State’ has been plugged by UMass on sports radio and TV stations across the state and there’s an advertisement on the team’s athletics social media account with Sam the Minuteman and Baldwin, the Boston College Eagle, beeping at each other in the parking lot of Gillette Stadium.

The term has even generated into a Twitter hashtag.

UMass and Boston College are the main two teams that should be in the conversation with the professional teams in town that the locals should care about.

Not only has there been minimal effort to try and engage the Commonwealth and its students until recently, but the lack of interest and attendance is a direct result of the team’s less than stellar performance.

Since becoming an FBS program, the Minutemen have struggled mightily—posting an 8-41 record in that span starting in 2012.

Boston College has been better than the Minutemen in the win-loss department, but that’s not saying much. The Eagles have gone 19-31 in the same stretch and have failed to win an Atlantic Coast Conference game in their last 10 tries.

The formula to success and an interested fan base is to win, or at least be competitive.

UMass nearly pulled off a shocking upset in the season opener when it trailed the No. 25 team in the nation Florida last Saturday night by three points after three quarters, only to submit to a 24-7 defeat by the Gators.

Yet the fact that the Minutemen were even in the game surprised so many. The campus was a buzz about the team and how competitive the game was. A team that was ranked 128 out of 128 in the Division 1 rankings from the Washington Post didn’t look so putrid after all.

Which sets up Saturday’s contest at Gillette, where both of Massachusetts’s biggest college football programs are vying for relevancy and victories at a time where college football in the area has reached its low begs the question—will the success ever come, and when it does, will it be enough to generate a discussion about the state’s teams?