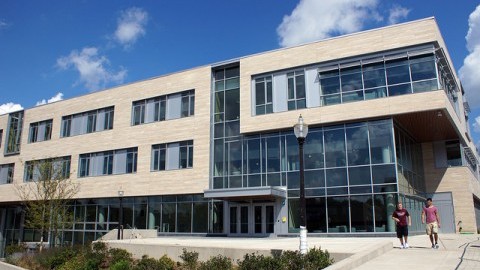 John Asher Johnson, a professor of astrophysics and astronomy at Harvard University, led a discussion about the lack of racial diversity in STEM academia and the need for national discussions of race and social power at his talk Friday in the Integrative Learning Center.

“If I’m worrying about where my next meal comes from, I’m not trying to get telescope time.” said Johnson during the talk.

The event titled “The Language of Equity and Inclusion: Four Simple Words” had about 35 people in attendance, leaving the majority of ILC S131 room empty. The discussion looked at some of the reasons that few black people are in the top astronomy departments in the country and how a lack of social power leads to a lack of options.

“If your personal self worth is based on having out-performed other people on this even playing field, then you’re being told actually there was a whole group of people you weren’t competing against because it’s not even. That’s going to really challenge their identity,” said Johnson, explaining one reason he believes many white people in hard science fields do not want to consider race as a part of their success.

Most attendees were students from the College of Natural Science. UMass physics professor Dr. Lori Goldner was present for the discussion but said she was disappointed with the lack of people in overall attendance.

“The first thing that could have happened, that I wish had happened, is this room should have been packed and it wasn’t,” Goldner said. She said that she was “personally disappointed that more of my colleagues weren’t here.”

The structure of professor Johnson’s talk required participation on part of the audience. Johnson instructed the audience members to break into groups and have respectful discussions about their experience and thoughts on the relationship between science and race.

“The discussion allowed for a sharing of ideas and starting a dialogue about how to address race,” said Goldner in praise of the structure of the talk.

Johnson led discussion on what the meanings of ‘race’, ‘social power’, ‘racism’ and ‘social justice’ are.

“It was nice to have this sort of discussions at all, number one,” said Goldner. “It was good to hear all the different input from everyone around the room.”

After the discussion, students talked about how the department needs to start taking steps to approach the issue.

“The department needs a lot of work, open discussions about this really helps foster discussion within the department,” said Kendall Sullivan, a junior physics and astronomy major.