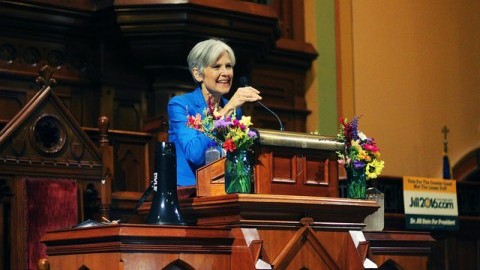 Politician, Jill Stein speaking at her own event in the First Church, Northampton on September 18, 2016. Photo by Caroline A. O'Connor.

Green Party candidate Jill Stein discussed her Green New Deal and progressive platform to an audience of about 300 in Northampton on Sunday night.

Stein spoke at the First Churches of Northampton on Sunday night. The event was co-sponsored by the Green-Rainbow Party, the UMass International Socialist Organization, UMass Divest, Berners for Jill, and the Stein Campaign.

“In this election, we are not just deciding on what kind of a world we will be, but whether we will be a world or not moving forward,” said Stein. “In terms of the climate crisis, which the science is telling us…that the day of reckoning is pretty darn close.”

Last Friday, the Commission on Presidential Debates announced that along with Libertarian Party candidate Gary Johnson, Stein will be excluded from the first presidential debate on Sept. 26 after failing to reach the required 15 percent average support from five national polls. Stein reached 3.2 percent of support while Johnson reached 8.4 percent.

“When our choices are a bigoted xenophobe and Wall Street’s preferred candidate, democracy is not an opinion,” said Ben Taylor, a UMass alumnus and Easthampton resident.

Despite her disadvantages, Stein plans to demonstrate outside of the debate at Hofstra University, the institution expected to host the first debate.

Stein said the media has a responsibility to inform American voters about third party candidates and their policies.

“The impact of [the sit-ins] is something for all the world to see,” Stein said, commending the effort of those who participated in the Divest UMass sit-ins that took place in the Whitmore Administration Building last semester. “If we were to stand up for what is right, we prevail.”

Stein used her speaking time to emphasize her emergency Green New Deal policy. Inspired by President Franklin Roosevelt’s New Deal, it would put an end to pipelines and offshore drilling to reduce climate change. Stein also calls for an emergency ban on fossil fuel infrastructure and the transition to alternative energy sources, which she claims will create 20 million jobs.

Stein also said that her positions are not only in accordance with the Green Party platform, but are also based on American values.

“We’re not just the movement with great ideas, these happen to be American values and community values,” said Stein.

Stein also plans for a Robin Hood tax to make public college free and cancel student debt. In order to pay for these proposals, Stein plans to cut military spending. She says that federal spending consists of a mostly military budget “with a bunch of little footnotes around it, like for housing and government services.”

“We need this alternative,” Meghan Lemay, a UMass alumna and Chicopee resident. “The two party system is undemocratic and oppressive. It can’t achieve real progressive reforms.”

In international affairs, Stein called for a peace offensive. Stein criticized the United State’s involvement in Iraq and Afghanistan for creating failed states and doing more harm than good.

Stein said that American intervention is not working or getting better, but “just creating new and more devastating forms of terrorism.”

Stein called for the freezing of allied countries’ bank accounts that fund terrorist organizations, and said she plans to resolve the refugee crisis by ending American interventionism in foreign affairs. She said she would also provide a path toward citizenship for refugees in the United States and rallies for the dismantlement of nuclear weapons.

“I don’t think Hillary is very trustworthy,” said Max Field, a UMass freshman and physics major. “Jill is the leader of the progressive movement now that Bernie [has not] gotten the [Democratic] nomination.”