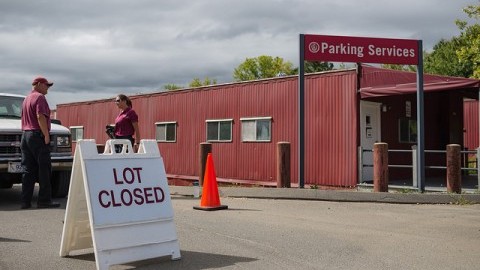 For many students commuting to the University of Massachusetts, the construction of a solar canopy in the Green 25 parking lot has interrupted their commutes.

Students with parking passes for Lots 12 and 25 reported varying difficulties in adjusting their daily schedule to the obstructions in parking.

“It’s super frustrating,” said Bridget Burke, a senior nutrition major. “The first day of school the lot was full and I had no idea. I was late to class and that kind of set the tone.”

“I had no idea it was closed until I got there, and no idea where the overflow lot was.”

Burke, who paid $255 for a Lot 12 parking pass, said that overflow from people unable to park in the lots undergoing construction has made her payment seem pointless.

Instead, she has been paying more money to park at meter locations around campus.

“It’s frustrating because I bought a parking pass for this lot and they knew construction was going on,” she said.

Burke said she appreciates that UMass has begun sending out emails updating her about the parking situation.

Jeff Martelli, a senior studying political science and economics, has a permit for Lot 25, and said his commute has not been seriously impacted by the construction.

“They’ve been closing a lot of it off for construction,” he said. “They gave me a permit for Lot 67.”

The lot Martelli is now parking at is located behind the Mullins Center, a short distance from Lot 25 on Governor’s Drive.

O’Donnell has not been able to park in Lot 12 since the beginning of school. He said he heard all of the people parking in Lot 25 were relocated to Lot 12, and that Lot 25 would not reopen until Oct.

“It’s frustrating because they keep making me park all the way by Mullins,” said O’Donnell.

However, he said that there had always been a bus at the Mullins Center he took into campus after parking, and the adjustment was not very difficult.

Brandon Dunham, a graduate student studying chemical engineering, has a parking pass for Lot 25 but has been parking in Lot 45 because of the construction.

Dunham was still commuting to the University during the summer when construction began and used the yellow lot at Lot 12, which has been filling up since the fall semester began.

“45 gets me right next to my building,” Dunham said, noting he was pleased with his parking situation. “I find a spot every day.”

Dunham added that the people he knows at UMass do not have a problem getting spots.

Ed Blaguszewski, the executive director of strategic communications at UMass, said last week that during the first week of school the University is much more lenient about who parks in the campus lots.

“All yellow lots are pretty much open to everyone,” Blaguszewski said, adding that it is a measure to prevent parents from being ticketed.

Amanda Hall, a senior studying English and history, no longer has a parking pass but used one last year when she had a half-hour commute.

Hall was parking in Lot 25, and complained that although she paid hundreds of dollars for a parking pass, other people were given priority to park there when the Mullins Center hosted events.

The parking pass system in general was criticized by Hall as classist.

“UMass insists on giving commuter students this big fee when they’re already taking out loans to go to classes,” she said.