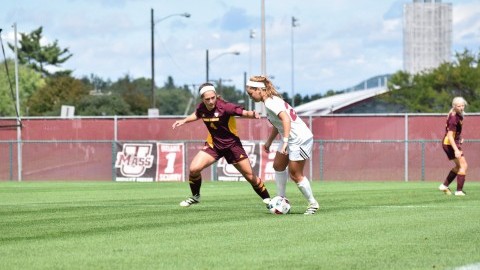 On a hot Sunday afternoon at Rudd Field, the Massachusetts women’s soccer team was burned 3-1 by Central Michigan University in an intra-conference matchup.

At the 31st minute of the first half and with Central Michigan (7-0) up 1-0, junior midfielder Meghan Sweeney scored what proved to be the eventual game-winner for the Chippewa’s when she beat UMass (2-3) goalie Cassidy Babin with a header after a deflection off of the cross bar.

Although the Minutewomen fought hard to even up the score, the game was eventually put away by CMU’s leading scorer, forward Alexis Pelafas, in the 67th minute.

“We knew Central Michigan was undefeated coming in and that they were very good,” UMass coach Ed Matz said following the game. “We thought we had scouted them well, but they’re a team that takes advantage of their opportunities and we gave them some good opportunities as well.”

The Chippewas opened the scoring early when Pelefas capitalized on a failed breakout pass from Babin and put it in the back of the net just three minutes into the match.

Even though the Minutewomen fell behind early, Matz thought his team battled back admirably.

“We have a great group of leaders on this team,” Matz said. “Even after we let up the third goal they never put their heads down and kept pushing.”

That resilient attitude proved to pay off when UMass junior forward Gabriela Kenyon got UMass on the board with her second goal of the season. A slick pass from senior midfielder Alyssa Fratarcangeli found Kenyon, who then fired past diving CMU goalkeeper Kristen Knutson in the 60th minute.

Momentum followed the Minutewomen after their first goal, however they couldn’t capitalize on some key scoring chances to bring the game within one.

The lead was extended again once Pelefas notched her second goal of the afternoon. The Minutewomen continued to fight back, and mounted continued pressure in the last minute of the match, but it proved unsuccessful.

The final whistle blew with the undefeated Chippewas leaving with their seventh win of the season.

Sophomore forward Salma Anastasio was optimistic about her team’s play after the close loss at home.

“We just have to work on finishing in the final third and creating more chances around the goal. We have to start being more creative so we can confuse the [opposition’s] back line.”

The Minutewomen competed hard with the Chippewas all game and even held a 12-11 shot advantage, but their lack of execution ultimately prevented them from competing with Central Michigan on the scoreboard.

With their next game against Brown University, Matz sees creating quality-scoring chances as a top priority.

“We’ll have to work a little bit harder to create better scoring chances,” he said. “We want to work on our combinations up top too, because I think that’s where we’re lacking.”

“Brown is going to be a really good team,” Anastasio said. “They play in the Ivy League, which I know is not an easy league to play in. They’re going to be a strong, aggressive, and organized team and we have a couple days to get ready for them, so I’m hoping we come out strong.”

UMass will head to Providence, Rhode Island to face the Oakland University Bears on Sept. 15, and kickoff is scheduled for 7 p.m.