MassPIRG kicks off for the fall semester 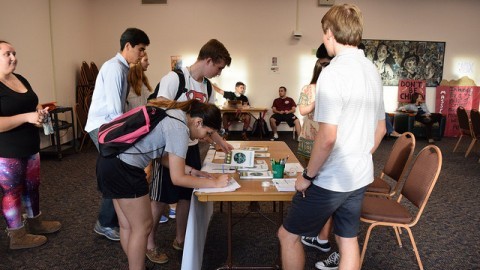 Student advocacy group MassPIRG held its kickoff event for the fall semester in the Cape Cod Lounge on Wednesday evening in which around 55 students attended.

The kickoff event introduced the main campaign for the semester, the New Voters Project, aiming to register 3,000 University of Massachusetts students before the Oct. 19 voter registration deadline.

The event also marked the launch of the organization’s campaigns on homelessness, clean energy and antibiotic-free fast food.

“For the first time in decades, our generation from 18 to 29-year-olds are the largest voting bloc, which is super exciting and I think it’s an opportunity that we should jump on,” said Julia Seremba, a junior studying nonprofit management in BDIC, chapter chair of MassPIRG and New Voters Project campaign coordinator.

“Not only for (electing) the president, but there’s also important ballot initiatives and local elected official that are to be voted for and it’s really important that we also take that into account.”

The event provided an overview of the New Voters Project. A statistic from the Center for Information & Research on Civic Learning and Engagement was presented that showed that only 45 percent of eligible voters between ages 18 to 29 voted in the 2012 election. Some reasons why turnout among students is low are failure to update dorm addresses and being uninformed of voter registration deadlines.

MassPIRG also hopes to register ten thousand students across Massachusetts before the deadline. To achieve these goals, the organization will hold recruitment drives and reach out to different student organizations on campus to assist them in their efforts.

“We want to make it a campus-wide effort where everyone is working together so we can have a big presence on Election Day,” said Seremba.

Another step is to set up voter registration tables around campus to register voters.

Guest speaker and political science professor John Brigham spoke on the history and dilemmas of voting. He discussed ID checks for first time voters and an incident in which a student was denied to vote for failing to update her dorm address.

“When I first came to UMass Amherst, I was surprised that in Amherst, a student who changed her dorm room from down the hall wasn’t allowed to vote because she was supposed to change her registration,” said Brigham.

The event concluded with students brainstorming ideas for their campaign.

“People are enthusiastic about the fact that we are actually going to fight for the homeless and not just serve them,” said Issa Sayegh, a sophomore philosophy major and Hunger and Homelessness campaign coordinator.

“So we’re not just alleviating the problem, but we’re also preventing it from happening in the first place.”

Gabi Mathews, a sophomore political science major and Stop the Overuse of Routine Antibiotics campaign coordinator, discussed the expansion of their social media presence to get fast-food companies like KFC aware of the dangers of overuse of antibiotics. The campaign also has plan to write letters to editors to raise awareness.

“It was really exciting having new people in the room and new ideas,” Mathews said.

“There were a lot more people who showed up than I was expecting, so that’s very exciting,” said Vuoritie. “We can go a lot of different directions from here.”

“Even though there aren’t any hugely competitive elections in Massachusetts with the exception ballot questions, I think it’s still important to increase voter turnout, especially amongst students,” said Bragdon. “So, that we can prove that we’re paying attention.”