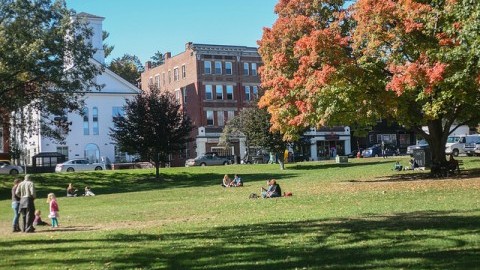 The talk titled “Race in America” will take place at the LeFrak Gymnasium at 6:30 pm on Sept. 13. The event is free and open to the public, however, as of Sept. 9, tickets for general admission have been sold out. A question and answer segment will follow afterward.

The talk will be mainly focusing on the issues affecting Blacks living in the United States, a topic that Coates has previously written about.

“As a national correspondent of The Atlantic, Mr. Coates writes about culture, politics, and social issues,” stated in a press release by Amherst College. “He has also received the Hillman Prize for Opinion and Analysis Journalism and a MacArthur Fellowship, and this April was named one of Time magazine’s 100 Most Influential People.”

The event is made possible by the Victor S. Johnson Lectureship Fund and the Croxton Lecture Fund.

Coates’ latest book, “Between the World and Me,” was published in 2015 and went on to become a New York Times bestseller. The book drew inspiration from the 1963 book “The Fire Next Time” by James Baldwin, an African-American essayist and social critic. The book focuses on the Coates’ life as he grew up in Baltimore, living in constant fear of the police and the streets.

“I am writing to you because this was the year you saw Eric Garner choked to death for selling cigarettes; because you know now that Renisha McBride was shot for seeking help, that John Crawford was shot down for browsing in a department store,” Coates wrote. “The destroyers will rarely be accountable. Mostly they will receive pensions. And destruction is merely the superlative form of a dominion whose prerogatives include frisking, detaining, beatings and humiliations.”

The book won the National Book Award for nonfiction. The National Book Foundation praised the book as “a brutally honest portrayal of the plight of the African-American male in this country … Incorporating history and personal memoir, Coates has succeeded in creating an essential text for any thinking American today.”

Similarly to Baldwin, Coates does not share the optimistic rhetoric of hope and progress from black Christians and believes that no major change in racial justice will likely come. In the book, Coates emphasized the dangers of “the Dream,” a fantasy that New York Times literary critic Michiko Kakutani stated as “an exclusionary white dream rooted in a history subjugation and privilege.”

“Historians conjured the Dream,” Coates wrote. “Hollywood fortified the Dream. The Dream was gilded by novels and adventure stories.”

While the book was received positive review, some critics attacked Coates’ assertions on race relations in America and the recent progress.

“Such assertions skate over the very real – and still dismally insufficient – progress that has been made. After all, America has twice elected a black president,” wrote Kakutani. “At other moments in this powerful and passionate book, Mr. Coates acknowledges such changes. In fact, his book often reads like an internal dialogue or debate.”