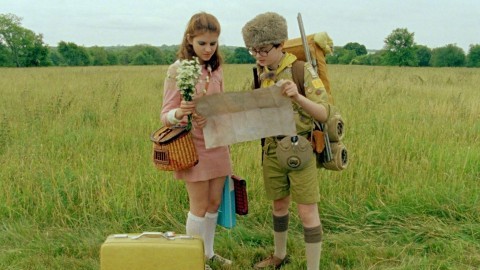 NORTHAMPTON – The Academy of Music Theatre will get an extra boost of twee charm this weekend thanks to writer-director Wes Anderson.

The Northampton Arts Council will screen “Moonrise Kingdom,” “The Royal Tenenbaums” and “The Life Aquatic with Steve Zissou” in that order at the historic venue on Friday, Saturday and Sunday as part of what it has dubbed the “Wes Anderson Film Fest.”

These three movies offer the uninitiated a good sample of the auteur’s quirky catalog, and provide longtime fans a chance to take a whimsical cinematic stroll down memory lane.

“Moonrise Kingdom” drops audiences into the idyllic, hazy summer of 1965 on a New England-neighboring island called New Penzance. Twelve-year old Sam Shakusky (Jared Gilman) and Suzy Bishop (Kara Hayward) meet, become pen pals and run away together. No less than a search party and a hurricane threaten their love. Bruce Willis, Edward Norton, Bill Murray and Frances McDormand round out the supporting cast in this gentle and witty coming-of-age tale.

Anyone dealing with the pressure to succeed can find a bleak laugh in the premise of “The Royal Tenenbaums,” which centers on three gifted siblings who excelled in their youth and fell into a rut in the 22 years after their parents’ separation. Absurd humor abounds in a script from Anderson and Owen Wilson, who stars alongside Gene Hackman, Gwyneth Paltrow, Ben Stiller and Luke Wilson.

Bill Murray takes a literal deep dive as the title character of “The Life Aquatic with Steve Zissou,” which Anderson co-wrote with the oft-melancholic Noah Baumbach. Zissou, an oceanographer and documentarian who lost his partner to a mysterious creature, assembles a crew to help him track down the beast and get his revenge. Cate Blanchett, Anjelica Huston, Willem Dafoe and Jeff Goldblum star alongside Murray in this cult classic.

One can certainly appreciate the combination of Anderson’s unique and ornate aesthetic with the Academy of Music’s iconic 800-seat auditorium, whose renovations the Massachusetts Historical Commission honored with a Historic Preservation Award in June 2015.

Attendees are encouraged to come dressed as their favorite Wes Anderson character. A prize will be awarded to the person with the best costume at each screening.

Tickets to the film festival can be purchased online or in person at the Academy of Music box office in Northampton, which is open Tuesday to Friday from 3:00 p.m. to 6:00 p.m.

The Academy of Music originally opened in 1891 and became the first municipally owned theater in the United States after philanthropist and Northampton native Edward H.R. Lyman gifted it to the city.

Over its 125 years, the Academy of Music has screened silent films and talkies, and played host to live entertainers such as illusionist Harry Houdini. The space also currently accommodates theater and dance performances and education in dance, film, music and arts.

Nathan Frontiero can be reached at [email protected] and followed on Twitter @nathanfrontiero.