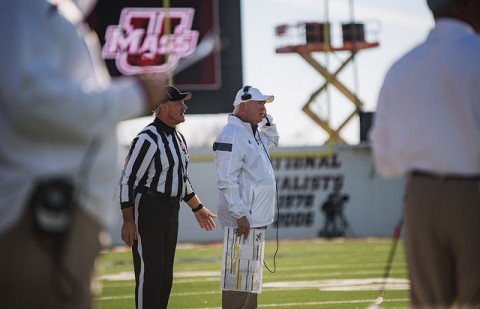 Despite falling to No. 25 Florida Saturday night 24-7, Massachusetts football coach Mark Whipple said he was pleased with UMass’ effort in all three phases of the game Monday morning on his weekly conference call.

The Minutemen (0-1) trailed the Gators 10-7 into the fourth quarter, but Florida’s Eddy Pineiro made a pair of field goals (48 and 49 yards, respectively) and quarterback Luke Del Rio’s 26-yard touchdown pass to Brandon Powell led the Gators to a 14-0 outbreak in the games final 11 minutes, 14 seconds.

“We had a chance. There were 10 minutes, 11 minutes to go in the game and we’re only down three,” Whipple said. “We certainly would have taken that. I would have been pleased with that.”

“I like the way they were in the locker room afterward. They weren’t happy, not that I expected them to be,” Whipple added.

The first player Whipple talked about after watching the film against the Gators was sophomore wide receiver Andy Isabella. Isabella led the Minutemen in receptions (three) and receiving yards (95), including a big 51-yard reception in the second quarter, and another 30-yard catch on third-and-five midway through the third.

Prior to the season, Whipple said Isabella would be featured more in the offense. The five-foot-nine receiver appeared in 10 games last season.

“On offense, Andy Isabella had a couple big plays. The moment wasn’t too big for him so that was good to see,” Whipple said.

Additionally, Whipple also thought that Comis played better than expected as the redshirt sophomore finished 9-of-17 for 141 yards with no touchdowns nor interceptions. His lone touchdown of the day came in the second quarter when he escaped a Florida blitz on a miscommunication from the offensive linemen.

“We really emphasized taking care of the football, and he did a good job of that … We had only one pre-snap penalty and we’re playing in front of 90,000 people, so I thought that was pretty good. (Ross) was a really good leader on the sidelines.”

After missing the entire 2015 season due to injury, on top of suffering an ankle injury in camp, wide receiver Jalen Williams missed the second half of the Florida game after the coaches noticed Williams limping into the locker room after a series of plays in the first half.

Williams’ lone reception was good for 24 yards, but came on a critical fourth-and-14 that continued UMass’ drive that ended in Comis’ touchdown.

“I just shut him down. He did a good job, I think he had six plays or something,” Whipple said. “We went into halftime and we told him just get ready for next week and get through a week of practice.”

“That was my decision, he wanted to go. We saw when he was walking into halftime that he had a little bit of a limp, so we wanted to give him another week and he was much better last night.”

Whipple’s scouting of the Eagles (0-1) oddly enough began before the Minutemen even entered the swamp.

Whipple admitted that he casually watched a portion of the Boston College-Georgia Tech game Saturday morning on TV prior to the 7:30 kickoff against Florida. The Eagles opened their season with a 17-14 loss to the Yellow Jackets in a game played in Dublin, Ireland.

“Their guys are similar to Florida up front. They have a bunch of really good leaders, they play hard, they make plays,” Whipple said. “They’re not really as deep as Florida, I don’t know if they’ll play 10 or 11 guys up front, but they’re really talented – big and strong. We going to have to try to create some short fields for the offense.”

Boston College finished with the No. 1 defense last year, allowing only 3,052 yards on the season despite finishing with a 3-9 (0-8 Atlantic Coast Conference) record. Defensive coordinator Don Brown has since transferred to Michigan to join Jim Harbough’s staff.

“They’re very physical and they are good. They have tremendous confidence in their own ability. They really play well as a team,” Whipple said.

Saturday’s game will be the second version of “Battle of the Bay State” against the Eagles, with kickoff set for noon at Gillette Stadium.