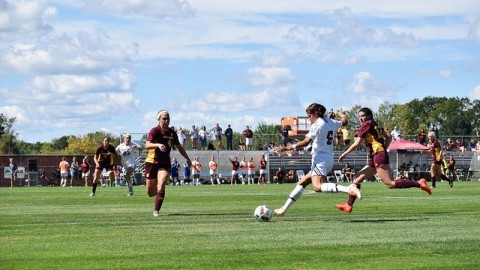 Coming off a 3-0 loss to Providence last Sunday, the Massachusetts women’s soccer team is seeking to improve its offensive performance after a week-plus break heading into its Atlantic 10 opener Thursday night against La Salle.

UMass (2-4-1) has struggled on the offensive end this season, netting a total of only four goals in the last seven games. The Minutewomen average 11.3 shots on goal per game, but have struggled to capitalize on their opportunities.

“I just think that players tend to get really down when they lose and they tend to put too much pressure on themselves,” UMass coach Ed Matz said. “We took a couple of days off, which I think we needed.”

The frustrations with the Minutewomen’s lack of offensive production have shown with their aggression on the field. In their last two games, UMass accumulated 17 fouls as opposed to Brown and Providence’s combined 13.

Thursday’s game is the perfect opportunity for the Minutewomen to gather themselves, as the Explorers’ (2-6) defensive play this season has not turned any heads.

La Salle is riding a four-game losing streak and has given up 10 goals in its last five games as opposed to the Minutewomen’s nine. On the season, the Explorers have allowed 19 goals compared to the 13 UMass has surrendered.

Matz, however, isn’t using statistics to prepare the Minutewomen and their game plan heading into Thursday.

“I look at La Salle as a good program and how they’re going to be home,” Matz said. “I don’t look at what they’ve done in the last two or three games, only their style of play.”

Matz discussed his familiarity with the soccer program at La Salle, mentioning his friendship with head coach Paul Royal.

But the most notable trait of the program is the Explorers’ matted-down turf field, which causes the pace of play to increase.

Though goal scoring has been a central critique of the Minutewomen, Matz looks at the last couple of opponents as top defensive teams. With lock-down defensive teams comes a lack of offensive chances, which is what has UMass feeling optimistic.

La Salle is 1-2 at home this season, challenging UMass, which is 1-3-1 on the road in five contests.

Junior forward Gabriela Kenyon discussed the team’s efforts in practice, working on their through-balls and staying connected when around the goal. The forward believes that as soon as the team starts taking chances that the goals will follow.

“We’re restarting, all those games are in the past, they don’t count,” Kenyon said. “We just have to put that behind us and focus on the A-10s now.”

Matz acknowledged the fact that there are only 10 games left for the seniors on the Minutewomen, meaning the sentimental aspect of the next few matchups mean more than just the win or loss.

Mollie Walker can be reached at [email protected] or followed on Twitter @MWalker2019.