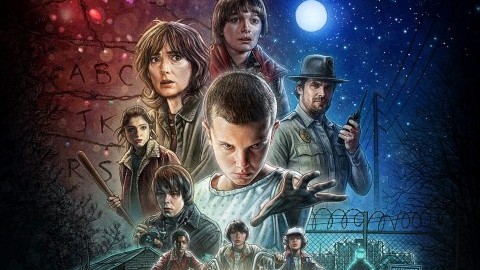 Collective nostalgia’s ability to invoke affinity toward an era the majority of audiences never experienced always amazes me. The less you know about the origins of “Stranger Things,” an extravaganza of 1980s pop culture references, the easier it is to enjoy.

It’s an unfortunate paradox – the viewer cannot fully appreciate the scope and ambition of “Stranger Things” unless they recognize the references, yet if the viewer recognizes all of the shot-for-shot homages, character archetypes and genre conventions, there’s less of an incentive to watch the show when one can rewatch its much better influences.

The show inspires the same feelings in me as those I feel toward year-end mashups made by DJ Earworm where he jumbles together the beats and hooks of the biggest pop hits of the year. It’s well made, and it’s crafted with the utmost care, yet the biggest feeling it conjures within me is a desire to go back to the works that inspired the mashup. Why couldn’t you have just composed your own song?

In place of an actual story, “Stranger Things” has seven or so different subplots mashed together into one narrative. In rural Indiana, after an intense Dungeons & Dragons session, a young boy leaves his friend’s house on his bike and mysteriously vanishes.

Meanwhile, a strange girl with psychic powers and an interdimensional monster escape a shady research facility, and the sister of one of the boys is trapped in a tedious love triangle between a creepy stalker and a creepy jock.

What we’ve got here is a high dosage of Amblin Entertainment – ­“E.T. the Extra-Terrestrial” and “Poltergeist” are the big ones – alongside a peppering of genre flicks inspired by John Carpenter and Stephen King.

Even if series creators, the Duffer brothers (Matt and Ross), fail to shake the impression they’re recreating earlier visionaries’ work rather than crafting their own, I won’t dare question their technical ability to bring about that recreation.

Filled with haunting imagery, from the shadowy outlines of the children on their bikes in the moonlit woods to the shot of the already memed to death alphabet Christmas lights, “Stranger Things” at its highpoints is a genre throwback filled with genuine intrigue and allure. Plus, that John Carpenter-inspired synth score absolutely kills.

Except I’ve seen all of this stuff before.

“Stranger Things” is part of the larger reboot/remix culture that currently dominates media, where past pop-culture relics are chopped up and thrown into a modern context melting pot. If movies like “Mad Max: Fury Road” or “Creed” are any indication, there’s nothing inherently wrong with this trend, though “Fuller House” and “Kung Fury” prove that it’s not an inherent good either.

Though “Stranger Things” has infinitely more passion than the plastic nostalgia of “Fuller House” and the obsession with surface-level iconography in “Kung Fury,” it still fails to elevate these old tropes in any meaningful way. Even if the acting performances are fine, all of the characters behave like archetypes rather than real human beings. The closest detail that comes to subversion is a well-coiffed bully who turns out to only be somewhat of a jerk.

Again, there’s nothing wrong with homage and references. One of my favorite novels, “The Brief Wondrous Life of Oscar Wao,” is jam-packed with obscure references to science fiction and fantasy novels, comic books, and other assorted staples of geek culture. On the other hand, one of my least favorites, “Ready Player One,” does this exact same thing. (My sympathies to the University of Massachusetts Class of 2016 for being forced to drudge through that dreck.)

The difference between “Oscar Wao,” “Creed,” and “Mad Max: Fury Road” versus “Ready Player One,” “Fuller House” and yes, “Stranger Things,” is that the former examples demonstrate an intimate knowledge of the past in order to enrich the mythology of the present, whereas the latter just want to dwell in the surface details of the past.

The Duffer brothers, who were barely out of kindergarten when the ‘80s ended, just do not demonstrate an understanding of the era that “Stranger Things” pays tribute toward. It’s a show made by people who learned what childhood in the ‘80s was like from Steven Spielberg, John Carpenter and Stephen King, who all grew up in the ‘50s.

It’s an imitation of an imitation, yet at least that original approximation was not beholden to its own inspirations. At times, it seems as if the Duffers’ aim is to cram in as much “80s stuff” as possible for the sake of it, authenticity be damned.

“Stranger Things” epitomizes the best and worst aspects of nostalgia. A sprinkle of it here and there can evoke pleasant memories, yet, to quote a cultural staple from my own generation, “it does not do to dwell on dreams and forget to live.” A multitude of signifiers just does not make up for a lack of substance.