The Proclaimers to headline the Iron Horse on Monday 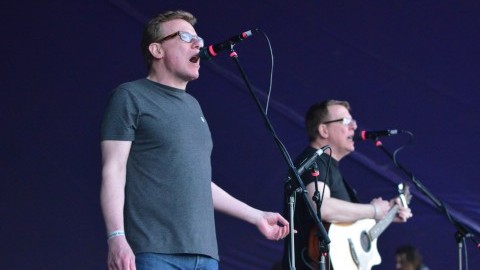 Legendary Scottish folk-rock duo The Proclaimers will be playing the Iron Horse Music Hall in Northampton Monday night in support of their newest album, “Let’s Hear It for the Dogs.”

A four-man backing band, as well as opening act Jenny O., will be joining them. The show was originally slotted for the Pearl Street Nightclub, but has since been relocated.

Consisting of twin brothers Charlie and Craig Reid, The Proclaimers were formed in Auchtermuchty, Scotland in 1983, shortly after they graduated high school together. With a soulful, acoustic sound that stuck out from the rest of the punk-centric U.K., they were able to catch the attention of popular English alt rockers, The Housemartins, who invited them on their U.K. tour in 1986.

By 1987, having gained the attention of the British public, the brothers made their first television appearance on Britain’s “The Tube,” and began recording their first studio album, “This Is the Story.” Containing the popular songs “Letter from America” and “Over and Done (with),” it reached #43 on the UK’s charts and was certified Gold by the end of the year.

The album, which is notable for its gritty, acoustic passion and hearty Celtic sound, went on to be rated as Scotland’s second best album of all time by The Scotsman newspaper in 2003.

In 1988, they churned out another fan favorite, “Sunshine on Leith,” the band’s highest-selling work to-date. The album, which contained the memorable singles “I’m Gonna Be (500 Miles)” and “I’m on My Way,” charted highly across the English-speaking world, going Platinum in the UK, Double Platinum in Australia, and Gold in the U.S.

The success of these first two albums earned them frequent radio airplay, several more television appearances, and prominent spots on the soundtracks of films like “Benny and Joon,” “Bottle Rocket” and “Shrek.”

Known primarily for their mighty sound, lovable fraternal image, and close ties to their Scottish heritage, the Proclaimers have maintained a loyal following ever since their initial rise to fame.

Although the bespectacled brothers slowed down their output in the ‘90s, releasing only one album (1994’s “Hit the Highway”), they returned full-time with 2001’s “Persevere,” and since then have maintained a prolific output, releasing a new record roughly every two years.

“Persevere” saw the brothers itching for a proper comeback after “Hit the Highway” failed to perform as well as their first two albums. Although “Persevere” did not create as much of a buzz as even “Hit the Highway” did, the band did just what their album preached; they persevered.

Since 2001, the duo has released six additional studio albums, recently breaking the 10-album mark with 2015’s “Let’s Hear it for the Dogs.”

“Let’s Hear it for the Dogs” was released on Cooking Vinyl in April 2015, and received consistently positive reviews. With over a dozen credited musicians, the album covers a wide range of genres and sounds that are delivered in an excitingly upbeat and energetic manner.

Charlie and Craig Reid bring a youthful, yet mature sound that results from over 30 years of songwriting. Head to the Iron Horse Monday night to see what it’s all about.

Doors open at 5:30 p.m. Dinner will be available for purchase inside. The show kicks off at 7:00 p.m. with LA-based singer-songwriter Jenny O. Tickets are available now for $30 from nbotickets.com.

Daniel Staffier can be reached at [email protected]