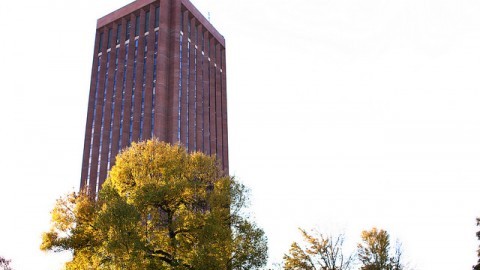 Instagram has turned millions of users into journalists, reporters, artists and writers. The ability to take a picture, edit and post it to social media all from a cell phone has given users a new power. Before this time of universal picture taking and photo posting developed, people relied solely on a skillful few. Photographers were given a heavy task: They were the ones who were responsible for telling a story through photographs.

Diana Mara Henry is one of these photographers. A more correct term for her would be a “photojournalist,” as she conveys societal, political and historical events through photography – primarily in newspapers. Her exhibit, “Through the Photographer’s Eyes,” located at the W. E. B. Du Bois Library, displays her iconic photos taken during marches, protests, strikes, elections and campaigns. The exhibit exists to show the strength of Henry’s career through various periods of change.

Viewers can peer into long, glass cases containing documentation of four decades of political, social and cultural changes beginning in the late 1960s through the eyes of Henry both as an artist and active citizen. She seeks to show the world through a progressive light, evolving toward equality for both people and the environment.

Photojournalism brings raw emotion in its execution, an art Henry has mastered. Solely reading an article lacks the tangibility and relatable-ness that photos provide. Her photographs transcend words and translate directly to feeling.

Along with her photos, the exhibit contains an abundance of memorabilia Henry collected along her travels as a photojournalist. Leaflets, pamphlets, press releases and guest lists are displayed loosely alongside the corresponding pictures from events. This element added context and relevance to Henry’s already impactful work.

One artifact that stood out was a postcard that included a woman who was arrested for graffiti during the Women’s Pentagon Action march. Looking at the postcard Henry received next to the woman’s picture enhanced the already existing appreciation for her servitude to society.

These documents, along with the entire exhibit, demonstrate the power of her profession and work. Whatever Henry captures is the impression bystanders received from the event. During Henry’s first paid assignment, she captured pictures of Liz Holtzman during her congressional primary campaign in 1972. Years later, Holtzman admitted she felt she owed her victory to Henry’s monumental photograph of her on the Brooklyn Bridge.

The second part of the exhibit resides on the 25th floor of the library. This portion is titled “Libel.” It breaks from her photojournalism portfolio and instead challenges viewers to envision alternate expectations and challenge the face value of the reportage of historical events.

The photos are all of people, her family and friends, with black and white labels placed on them. The viewer is made to feel uncertain of whether or not the label corresponds truthfully to their characteristics.

This exhibit includes a photo of a free-spirited woman lounging on a horse with a joint in her hand labeled “slacker.” Another photo is of a white family standing ideally outside their picture-perfect home with “Ku Klux Klan” stamped across. This exhibit was first shown in 1988, a year ravaged by KKK riots.

Henry’s ability to capture a single fleeting moment and have it represent a multitude of emotions is a testament to the dynamism of her work. Gazing at all the events she was able to capture, and thus transcribe to viewers in a way she thought would make it memorable, was surreal.

The whole experience felt similar to that of Instagram. Viewers on social media applications like Instagram should always read captions with Henry’s exhibit in mind. People should attempt to envision things outside of that photographable moment and dare to question both its clarity and accuracy in terms of its portrayal.

Tara Branch can be reached at [email protected]