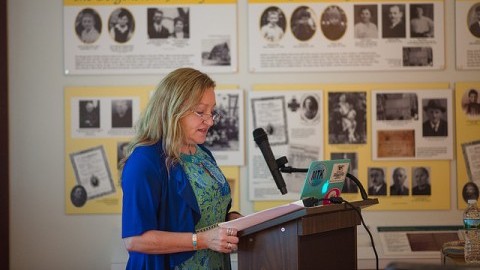 Kathleen Brown-Pérez was 15 years old when she spoke in great detail with her grandfather of their tribe, known as the Brothertown Indian Nation or the Eeyamquittoowauconnuck. This talk with her grandfather motivated her to study federal Indian law and to inform American Indians of their civil rights.

Brown-Pérez, an assistant professor with the Commonwealth Honors College, held a lecture on the oppression of American Indians on Wednesday evening at the University of Massachusetts.

She delivered her address, titled “Defined Out of Existence: The U.S. Government’s Continuing Attempt to Remove and Replace American Indians,” at the Institute for Holocaust, Genocide and Memory Studies.

“We are gathered in the town Amherst, named for Jeffrey Amherst. A man who committed biological warfare against indigenous people,” Brown-Pérez said as her opening remarks. She took this moment to reveal that since 1763 governmental powers have been trying to remove, or relocate Indian tribes across America.

Brown-Pérez stressed the phrase “Assimilation on a grand scale.” She revealed an array of photos, pointing to one in particular: a before and after photo of a young boy. His before photo was him dressed in his traditional clothing with his long dark brown hair. The after photo was of the young boy dressed in what was known as “civilized clothes,” his hair is now cut short. This photo also adds higher quality, making it appear as though the boy has lighter, white skin.

The idea of “mass assimilation” became a concept for the United States government to remove any sort of tribes that were still present.  The goal was “move to the city and forget who you are,” said Brown-Pérez.

In order for Americans to have a better understanding of the oppression of American Indians, Brown-Pérez said that it must start in the classroom. “There is a lack in U.S. history,” said Brown-Pérez, arguing that more courses on the history of indigenous people must be added around the nation.

“I recently moved to Turners Falls, where the first time in my life the mascot is an Indian,” Brown-Pérez said. She revealed that a group of parents created a petition to change the mascot due the lack of knowledge of what many think they know about American Indians. This petition argues the removal of all native names and images at non-native schools. Brown-Pérez then went on to reveal that those who want the removal of the mascot are the ones that have an understanding of tradition.

Brown-Pérez concluded “Just because it is tradition does not make it right. We are calling for a change in the Turners Falls mascot.”

“I thought it was really interesting how she has fought for her own tribe and for others,” said Erin Johnson, a junior biology major at UMass.

“It gives you so much insight on what American Indians go through and what’s happening and what could happen in the future,” said Ciya Bresilla, a freshman at UMass studying psychology..

Danielle Haley can be reached at [email protected]