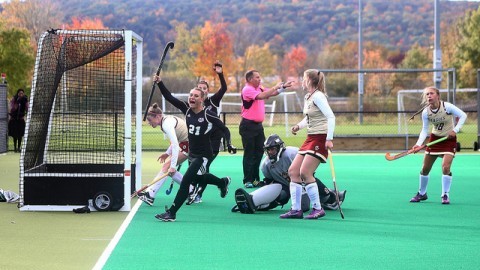 After the Massachusetts field hockey team finished the 2015 regular season 11-8 overall and 7-1 in Atlantic 10 conference play, the Minutewomen seemed pretty excited for playoffs.

After winning its play-in game against Kent State 1-0 in Amherst, UMass moved on to the first round of the NCAA tournament where it played No. 2 Syracuse and lost 4-2. The Minutewomen were however able to more than one goal past Syracuse goalkeeper Jess Jecko, a struggle for most teams in the tournament.

Despite the disappointing loss, UMass is thinking positively about the 2016 season and looks to make another run at the NCAA tournament this year.

“We want to win A-10s first and then we want to make it to NCAAs without a play-in game,” senior defender Hannah Farrell said. “We want to play good in conference play and make it to the final four this year … We want to be in a situation where we’re not drawn against the team that could be the national champ.”

Coming into the season, UMass (2-2) was ranked second in the A-10 coach’s poll behind only Richmond, despite beating the Spiders 3-0 in last season’s A-10 championship.

While every team strives to be the best, the Minutewomen have not even begun to think about that. Instead, they are just focusing on how they think of themselves.

“I don’t think we had it on our thoughts,” senior forward Izzie Delario said. “This team has evolved to be a team that’s philosophy isn’t focused on what teams think of us and more about what we think of us.”

“I think we’ll be first,” Robertson said. “I’m glad we’re not, I don’t mind being in an underdog position.”

The early stages of the 2016 season have already been up and down of the Minutewomen.

After getting swept in its first two games at the Wildcat Classic in Durham, New Hampshire courtesy of UNH and No.16 Northwestern by a combined score of 7-1, UMass bounced back by defeating its next two opponents in UMass Lowell (8-0) and Columbia (3-2) over Labor Day weekend.

Despite the mixed results early in the season, Delario believes the team chemistry is the best it’s been in the four years she has played for the Minutewomen.

The schedule for UMass looks to be a challenging one. The next game is against undefeated Connecticut (3-0) at home Friday afternoon.

After, the Minutewomen play their first conference game against St. Louis, then finish up their non-conference play against Harvard, Stanford, Boston College and finally the Huskies for a second time.

Out of all the non-conference games, the team seemed to be split on which play would be the most exciting.

“Boston College, that will be a big one,” Robertson said. “I went to UMass, and UMass and Connecticut and always had a pretty big rivalry … We get to play them twice so that’ll be fun.”

“The goal is to win every A-10 game,” Robertson said. “Every game is just as important as the other. The team is focused on getting better every game.”

The start to the season appears to be rough for any team as they try to work themselves back into flow of the game, but the Minutewomen are ready to face it head on.

“Maintaining the season is tough, but we just need to take care of conference games and nothing not looking forward to anything specific,” Farrell said. “There’s no one we’re scared of … We just have to execute all 70 minutes (of each game) this season.”