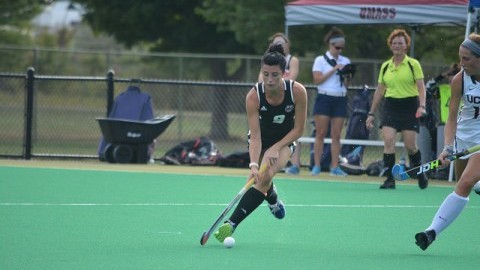 Top-ranked Connecticut kept the Massachusetts field hockey team on its toes throughout Wednesday’s matchup as the Minutewomen fell 8-1 on the road.

In the New England rivals’ second matchup of the season, the Minutewomen were seeking revenge after falling 2-1 to the Huskies on Sept. 9.

“The score is hurtful, we didn’t play our best hockey,” UMass coach Amy Robertson said in phone interview after the game. “At times we were very individual and we got frustrated a little bit. This is not indicative of our typical form.”

UMass’s lone goal came 18 minutes, 20 seconds into the first half courtesy of senior forward Izzie Delario, her fifth of the season. The goal gives Delario 16 points this season, three ahead of Nicole Miller who had the lone assist on the goal giving her 13 points on the year.

The goal also ties Delario with Sarah Hawkshaw and Melanie Kreusch, whom all now lead the team with five. With the assist, Miller now only trails the aforementioned Delario (six) for team lead, as her season total rose to five.

Robertson, however, didn’t pinpoint Delario as the only one doing her job. She instead talked about the team as a whole.

“Everyone does their job, whether it’s a defender and when you’re a forward it’s your job to put it in the net,” Robertson said. “All our forwards do their job … They’ve all been reliable.”

The Minutewomen came into Wednesday’s matchup with the Huskies with momentum after defeating No. 9 Boston College 3-2 in overtime on the road Sunday afternoon.

UMass, however, could not take the momentum and use it to their advantage. Part of this was due to the play UConn junior forward Charlotte Veitner, who ranks second all-time in program history for points.

Veitner was quick to sneak through the Minutewomen defense, scoring four times to give her 16 on the season. Her goals came in the 15th, 26th, 40th and 56th minute, while also adding an assist, giving her a total of five points Wednesday.

“She has had an unbelievable season,” Robertson said of Veitner. “She’s gotten better each game and we knew that coming in …  She was just in the zone, it was something I’ve never seen before.”

UConn got started early scoring three goals in the first 15 minutes and didn’t look back from there. After Delario scored to cut the Huskies lead to two, Veitner scored 10 minutes before halftime to make it a three-score game.

In the second half, the Huskies poured on the scoring with four unanswered goals without much push back from the UMass defense.

“We weren’t ourselves, we got frustrated and didn’t find solutions,” Robertson said. “I think it was the shock of the quick early goals … Today we saw vulnerability and know we can’t allow that, we have to be a better team.”

After a crushing defeat such as this, Robertson said she is sympathetic to the frustration, but knows in order to move forward the team must stay positive.

“I understand the frustration, but we have to look forward and have to find a way to reflect on what we did well and how we can be better,” Robertson said. “We have to stay positive.”

The Minutewomen return home after their brief two-game road trip and continue conference play, looking to build off their first conference win against Saint Louis on Sept. 16.

“We’ll get focused on us and we’ll really be focused on our press, how we are at attacking and what we think will be the most threatening to opponents,” Robertson said. “We’re excited to be home Sunday and excited to be playing in conference.”