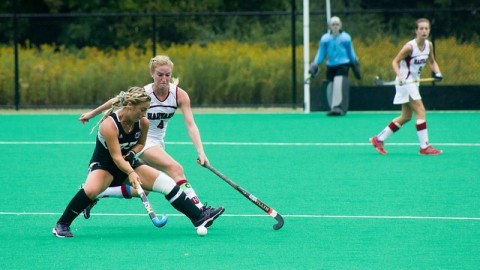 Nicole Miller dribbles the ball in the game against Harvard on Sunday. (Chris O'Keefe/Daily Collegian)

AMHERST – The Massachusetts field hockey team, in its third game of a four game stretch at home, claimed its second straight victory and fourth of the season against Harvard, winning 3-1.

“It’s a huge win,” UMass coach Amy Robertson said after the game. “Harvard is a great team. It may not show on the scoreboard, but they put us under a lot of pressure today and to get the result in the end is a huge accomplishment for us.”

Both teams struggled to generate much offense in the first half. However, in the 29th minute, the Minutewomen broke through first with defender Melanie Kreusch squeaking through the Harvard defense. Kreusch was tripped 10 feet from the goal and was awarded a penalty stroke.

Kreusch elected to shoot left side of goalkeeper Olivia Startup and the ball hit it off her right pad and into the bottom left corner of the cage to give UMass a 1-0 lead late in the first half.

Unfortunately UMass suffered a few early turnovers in the first half, but a strong defensive effort for the Minutewomen anchored by redshirt junior goalkeeper Emily Hazard—who finished with five saves–kept Harvard off the scoreboard.

Four out of the five shots on goals for the Crimson came in the first half, and Hazard managed to stop all of them. The lapses UMass suffered with possession were a notable issue through much of the game.

“It was definitely our weakness in this one, letting balls jump off our sticks,” said forward Hailey Cockrum. “It’s definitely something we’re going to practice this week.”

Harvard senior forward Marissa Balleza picked the ball up in the 39th minute off of a UMass turnover in the defensive zone, dribbled to the middle and beat Hazard for the Crimson’s only goal, knotting the game at one early in the second half.

However, junior midfielder Sarah Hawkshaw regained the lead for the Minutewomen off of their second corner stroke in a row and an assist from midfielder Hailey Cockrum in the 51st minute.

“I was trying to focus on my role instead of the whole team, to see what I could do to help on the small steps,” Cockrum said.

Four minutes later UMass extended its lead when Kreusch jumped on the loose ball following a rebound from  a shoot by Cockrum beating Crimson goalkeeper Olivia Startup on the right side (her second goal of the game) padding the lead at 3-1.

The Minutewomen took advantage of their corner stroke opportunities when they could, converting two out of five for goals.

“I’ve been practicing (corners) a lot during practice,” Kreusch said. “So I just know what I need to do…I just tried to hit and it went in.”

The extra time taken in practice paid off for Kreusch as well as the rest of her team, and Robertson was definitely pleased with her team’s performance.

“I thought we stayed composed as much as possible,” Robertson said. “And we solved some different problems that Harvard put forth. I think once we got it past their first or second line of defense we really put the pressure on them by attacking at speed and going at the goal.”

The Minutewomen’s next game is on Friday at 4:00 p.m. at Gladchuk Sports Complex. It should prove to be one of their biggest tests all season seeing as it’s against Pac-12 opponent Stanford.

“Big week coming up next week,” Cockrum said. “We just need to focus on the mistakes we made and things we can control. This season is about us and we’re just trying to make ourselves better.”