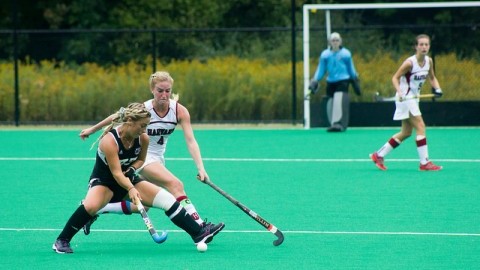 Facing the only undefeated team in all of Division I field hockey would make many teams fearful, maybe even regretful that they’re voluntarily going against a team of such caliber. But for the Massachusetts field hockey team, it presents an opportunity to make a statement and get a little revenge as they travel into Connecticut to play the No. 1 ranked team in the country.

“This is an opportunity to prove to ourselves that we can compete with the best,” UMass coach Amy Robertson said. “We have been playing high level hockey of late.”

With the losses to former No. 1 Syracuse and No. 2 Duke, the Huskies (9-0, 2-0 Big East) came out of the weekend as the only remaining undefeated team in the country and are having little trouble fending off teams. The Minutewomen’s (5-4, 1-0 Atlantic 10) largest margin of victory was eight while UConn’s smallest margin of victory was one. That team who lost by just one back on Sept. 9 happens to be a UMass team that is hungry for revenge.

“There is belief that is growing within this group,” Robertson said. “But I don’t think we’re daunted by playing away from home anymore. It is a great opportunity against a great team.”

The Minutewomen are one of three teams to come close to handing UConn its first loss of the season. In that game, UMass took a 1-0 lead into halftime before squandering two goals in the second half.

“I thought our defense from top to bottom was stellar,” Robertson said after the 2-1 loss on Sept. 9. “We just gave up too many [penalty corners], we got out of position a couple of times and [UConn] has a lot of speed so if they can get into the circle, they have great stick control and earned some corners off of us today.”

It was the Minutewomen offense that did not seem to click all day against a tough Huskie defense. However, UMass is the lone team to score a first half goal against UConn all season. They have outscored their opponents 17-1 in the first half of games.

The Minutewomen will need that early scoring to keep the game tight. In the second half, the Huskies have outscored opponents 24-7, giving them a 41-8 advantage in goals scored on the year. Opportunities are far and few between against goalkeeper Nina Klein and the UConn defense.

Robertson believes her team can play at a high level and thought the Huskies presented them with a great opportunity the first time around. In their second meeting of the year, Robertson is expecting more out of the Minutewomen.

“We need to play a little better,” Robertson said. “I think we are pretty evenly matched and I know we are fully capable of playing with them.”

What hurt the Minutewomen last time out was the amount of penalty corners surrendered. UMass gave up eight corners while only getting three of its own. It was something Robertson said after the game that the Minutewomen needed to improve on. UMass also struggled to get the ball on net, recording only two shots on goal in the game, one resulting in their lone goal.

On the other hand, UConn finished with seven shots on goal. Minutewomen goalkeeper Emily Hazard played well despite the loss. This time around though, UMass will need to generate more offense in order to take down the top team in the country.

“One, we need to finish stronger entering the circle,” Roberston said. “We need to be prepared and bring our best.”

It starts and ends with the Minutewomen offense. Izzie Delario, Nicole Miller and Sarah Hawkshaw will need to be in sync and generate chances for the club because if they are stagnant like they were last meeting, any chance of upsetting the Huskies will be a distant memory.

The game is scheduled for Wednesday at 3 p.m. at George J. Sherman Family-Sports Complex in Connecticut.

Tyler Fiedler can be reached by email [email protected] and followed on Twitter @Tyler_Fiedler.