UMass football heads into 2016 season with a tough slate ahead 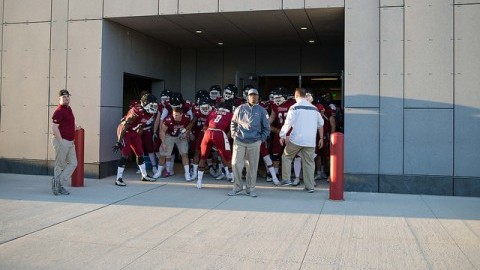 The Massachusetts football team is heading into uncharted territory.

In their first season as an FBS Independent, the Minutemen will face a challenge like no other the program has faced before.

Their schedule is loaded with superior opponents, they have lost talented players in the inevitable roster turnover and they are without a conference to receive revenue from for the first time as an FBS member.

Life as an independent is challenging. UMass (0-1) went from competing in the Mid-American Conference making $1 million in shared conference revenue to a college football outsider, joining Army, Notre Dame and Brigham Young University.

But that won’t stop the Minutemen from playing in 12 games against difficult opponents, as Mississippi State, South Carolina and Boston College ready to face UMass at different points during the season.

The Minutemen opened their season last Saturday night in Gainesville, Florida, with the nation expecting them to get pummeled by the Gators. UMass surprised all – trailing by three points heading into the final 15 minutes in a game they were 37-point underdogs in.

They dropped the season opener in an ultra-competitive 24-7 affair, which is what Minutemen fans can hope to see out of the team for the remainder of the season.

Ross Comis opens up the season as UMass’ starting quarterback, beating out transfer Andrew Ford. Comis was 9-of-17 with 141 yards against Florida and rushed in the lone UMass touchdown in the second quarter. Comis posted a quarterback rating of 122.6 in his first game as a collegiate starter.

“I thought Ross showed some toughness and some ability there,” Whipple told the Daily Hampshire Gazette following Saturday’s defeat. “He was really amped up as all the guys were. But he hung in there and did some things.”

Offensively, the Minutemen need to show improvement. Gaining just 187 yards and 12 first downs, UMass was in the game largely due to the penalty yardage and miscues by the Florida defense. The Gators gifted the Minutemen 80 yards in penalties with UMass coming away with just seven points.

Receivers Andy Isabella, Bernard Davis, Shakur Nesmith and Jalen Williams, along with tight end Adam Breneman, are the weapons Comis will need to utilize in the passing game to score more points for the Minutemen offense this season.

Breneman, a redshirt junior, is a transfer from Penn State who hopes to provide an instant impact in the UMass offense. Isabella has already developed some chemistry with Comis, racking up 95 receiving yards in the opener on three receptions, including a 53-yard connection in the second quarter.

Marquis Young should carry the bulk of the work in the backfield. The Fairpoint, New York native appeared in all 12 games last season, rushing for 960 yards and seven touchdowns to lead the team. Sekai Lindsay will be featured in a third-down role.

Defensively, the Minutemen have already shown improvement from last season with a valiant effort in Gainesville.

Edge linebacker Da’Sean Downey made a critical stop on fourth-and-one at the UMass five-yard line to turn the ball over on downs. In the fourth quarter, Downey slipped past the Gator offensive line and strip sacked Florida quarterback Luke Del Rio on third down to what looked like pushed the Gators out of field goal range before kicker Eddy Pineiro nailed a 49-yard field goal.

Downey, junior college transfer Teddy Lowery, Shane Huber and Steve Casali will be the linebackers in the Minutemen defense, with Sha-Ki Holines, Ali Ali-Musa, and Peter Angeh rushing the passer up front.

The Minutemen held the No. 25 ranked team in the country to just 10 points through three quarters, eventually permitting 14 points in the fourth quarter. That’s a bit of an improvement from the 31.4 points per game scored against them last season, including allowing more than 47 points four times.

“We played hard and we played with passion,” Huber told the Daily Hampshire Gazette. “We focused on meshing as a unit and I thought it showed.”

It may be unrealistic to expect UMass to win many games with a daunting independent schedule, but it is not reaching to say the Minutemen should compete hard in most contests like we saw Saturday night.