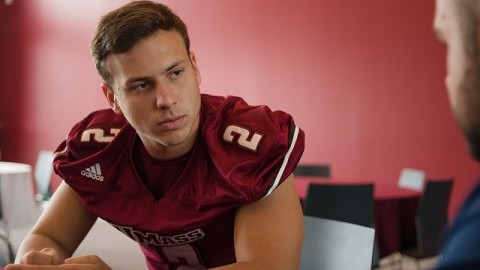 As well as the Massachusetts football team may have played Saturday night against at-the-time No. 25 Florida, the Minutemen still weren’t satisfied.

There were certainly many positives that UMass (0-1) can hang its hat on, but at the end of the day the Minutemen realized they failed their mission down in the “swamp”: come away with a victory.

“There’s no moral victories, no matter how well you play against a Top 25 team,” quarterback Ross Comis said Tuesday after practice. “We had a chance to win the game, we just didn’t make the plays when we needed to.”

Comis finished 9-of-17 for 141 yards with zero turnovers in his first collegiate start.

“I wasn’t as nervous as I thought I would be; I think I was more excited when I got out there,” Comis said.

“I think the fourth-and-14 to Jalen really got me going and got the offense in rhythm as well. I think we played well and in the fourth quarter they just had fresh guys coming in and out, and were able to get some pressure on us.”

UMass had Florida on the ropes as the Gators were clinging to a 10-7 lead midway through the fourth quarter, before Florida outscored the Minutemen 14-0 in the game’s final 11 minutes, 14 seconds.

Jack Driscoll, who made his first career start as right tackle after redshirting the 2015 season as a freshman, said that he was much more pleased with how UMass started this year as opposed to its 48-14 defeat in Boulder, Colorado last season.

“Going back to the opening game last year, it was a blowout against Colorado. People realized that if we play well as a team, we can play with anyone in the country,” Driscoll said.

As a team, the Minutemen mustered only 46 yards rushing while the offensive line surrendered four sacks.

“It was promising, but people were disappointed. You play to win, you don’t play to lose [by 17 points], but there were some good takeaways,” Driscoll said. “We watched film the next day and now we are onto BC.”

Although the Eagles (0-1, 0-1 Atlantic Coast Conference) may not have the depth nor speed that the Gators do in their front-seven, Boston College returns one of the most experienced defenses in the country, despite losing defensive coordinator Don Brown.

The Eagles ranked first in the country in total defense (3,205 yards) and yards allowed per game (254), while trailing only Alabama in rushing defense (994 rushing yards) and third in points scored (183) behind only Wisconsin and Ohio State.

Regardless of the season opening defeat, Driscoll noted how important it was to open the season against a national powerhouse from a major conference like the Southeastern Conference.

“That was a big thing—if you go and play a cupcake team week one, and then you go play a team like BC it’s tough because you don’t have your bearings. Going down and playing Florida week one was good because it helped get our speed down,” Driscoll said.

“They had preseason All-American’s, so it’s good to play against guys who are going to be very similar players to BC. You know what to expect when you have a game like that under your belt. BC is going to come at us hard, their defense is really good and we have to play our best game,” Driscoll added.

Comis agreed with his offensive lineman.

“Everyone is saying that Florida is a great defense, but BC ranked number one in a lot of categories last year,” Comis said. “I think they have eight guys back from their defense. Obviously they have a different defensive coordinator, but they’re going to be good.”