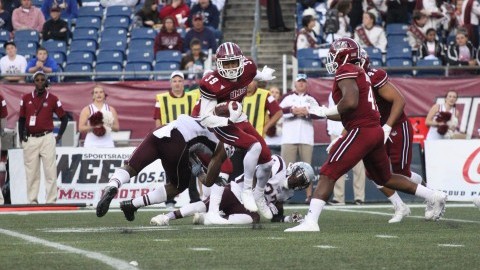 FOXBORO — Going into halftime Saturday at Gillette Stadium, it appeared the Massachusetts football team might do the impossibe

Leading Mississippi State 14-13 after two quarters, all UMass (1-3) had to do was continue its solid play on both sides of the ball and maybe, just maybe, they could beat the heavily-favored Bulldogs (2-2, 1-1 Southeastern Conference) and shock the college football world.

Then came the third quarter, which brought all optimism to a screeching halt.

With MSU outscoring the Minutemen 28-7 in the third quarter, most thought the game was over. UMass would rally to score 14 unanswered points in the fourth quarter, but it wasn’t enough as Minutemen fell to the Bulldogs, 47-35.

UMass coach Mark Whipple was happy with the effort the Minutemen showed in the fourth quarter after the demoralizing previous 15 minutes.

“We got it within six which was great character by our guys,” Whipple said. “Our guys competed right with them, just made too many mistakes on both sides of the ball. We just needed to make one stop or one turnover to really get the momentum our way and credit them. We just couldn’t get it.”

Whipple was cognizant of the fact that the third quarter was a major reason his team lost and he believed that the team had been worn down a bit coming out of the half.

“When I saw that they had 50 plays at half, that’s just way too many,” Whipple said. “We had a one-play drive on Marquis’ 83-yarder and then a one-play interception where we missed the protection. Those things you can’t do against and SEC team, because they’re going to take the ball.”

Linebacker Steve Casali believed the reason they struggled came down to the mistakes made in that quarter.

“That goes back to our preparation,” Casali said. “We made those same mistakes during practice. So the main focus this week going into practice is doing your job and we’ll be all right.”

MSU quarterback Nick Fitzgerald gave UMass trouble throughout Saturday’s game, rushing for 110 yards, along with his 299 yards through the air. As a team, the Bulldogs ran for 299 yards with Fitzgerald, Brandon Halloway and Ashton Shumpert all going over 60 yards on the day.

Fitzgerald was someone that the Minutemen were focusing on coming in and Casali pointed to the mistakes UMass had that led to them not containing the dual-threat quarterback.

“We were focused on it. We just made too many mistakes today,” Casali said. “You can’t make those mistakes against a big-time team like Mississippi State.”

Despite the struggles the Minutemen faced Saturday, the team is coming away with a lot of positives following the way they played in the fourth.

UMass quarterback Andrew Ford made up for his third quarter struggles with a strong fourth quarter, throwing for two touchdowns in the quarter. With two games under his belt as the Minutemen’s starting quarterback, he now has seven passing touchdowns.

Ford was proud of the fight his teammates showed in the last quarter.

“As long as there’s time on the clock, as a team, we’ve got to keep fighting. That’s what we did today,” Ford said. “We’re never out of a game. Just one play at a time, one drive at a time. Play to the best of our abilities.”

Running back Marquis Young believes the team has started getting more comfortable with Ford under center.

“We’re definitely moving towards the right direction,” Young said. “He’s a good player. He kept me calm and he kept me patient in the backfield. I tried my hardest to do the same and give him motivation to make the right play.”