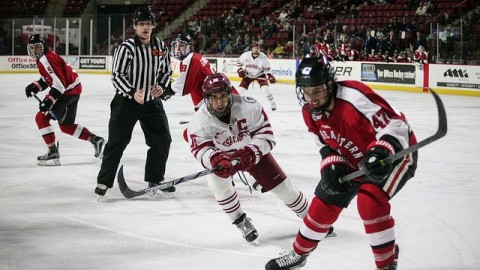 The Massachusetts hockey team announced its captains for the 2016-17 season on Tuesday. The group features a trio of seniors and one junior.

For the second year in a row, senior forward Steven Iacobellis will be the team’s head captain, making him the 10th two-year captain in NCAA history and the fifth in the Minutemen history. The alternate captains are junior defenseman Brennan Baxandall, senior defenseman Dominic Trento and senior goaltender Alex Wakaluk.

Wakaluk saw more playing time during his 2015-16 junior season. He played a career-high 439 minutes in 10 games and stopped 206 shots. His first victory came last season against the Army Black Knights on Jan. 2 when UMass claimed victory 2-1 in overtime. Wakaluk also had 22 saves in the game.

The Minutemen open the season in their annual exhibition matchup with Division III foe Dalhousie on Friday Oct. 1 at the Mullins Center.