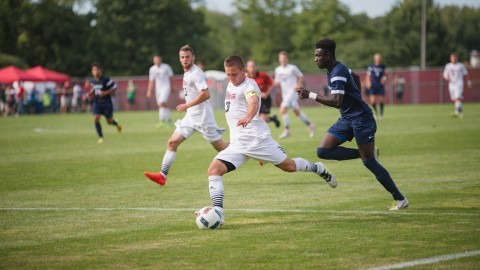 A tie is not what the Massachusetts men’s soccer team wanted, but the Minutemen will take it.

In its home opener, UMass (0-2-1) fought Saint Peter’s through double overtime before the match was deemed a tie, an outcome it was not satisfied with.

The Minutemen’s only goal came in the 18th minute. Alex DeSantis’ free kick from the right sideline found its way into the left post. DeSantis said that the 30-yard kick was intended to set up a header but found the net instead.

The lone goal proved not to be enough though.

“I think we’re disappointed,” UMass coach Fran O’Leary said. “We came out on fire and we could have been two or three up in the first five minutes.”

The Minutemen put up 13 shots in the first half. Their first big opportunity came in the eighth minute when freshman Andrew Barrowman broke away from the defense but his shot went wide left.

UMass lost to the Peacocks last season 3-0 and O’Leary believes that today’s tie shows how far the team has come.

“We played St. Peter’s last year and they were three up in the first 25 minutes and the game was over,” O’Leary said. “So our guys have made big strides since then and deserve a lot of credit.”

In the game against the Saint Peter’s (0-2-1) last season, UMass only managed eight total shots.

DeSantis praised the team’s overall growth from a year ago.

“I think we are more of a unit,” DeSantis said. “I think we are tighter defensively, letting up less goals. And we’re basically the same team just a year older, that definitely helps.”

Despite coming away with only a tie, a lot of positives came out of the game on both sides of the ball.

“Well, I thought the forwards were terrific, they’re lively,” O’Leary said. “Some days the goals go in some days they don’t go in. You know, their keeper made two, three great saves. We’re probably a second goal away from maybe putting three or four in. These things, you know I thought particularly in the first half offensively we were very good. We put up something like 12 shots in the first 30, 35 minutes which is just, again, very unusual in a game.”

In total the Minutemen outshot the Peacocks 16-15, most of which came in the first 45 minutes.

St. Peter’s tied the game in the 42nd minute when Luke Fairlamb scored on a penalty kick.

The UMass defense limited the damage Saturday afternoon, as the group put in their best performance of the season thus far.

“I thought the whole back four did great,” O’Leary said. “The two center backs Brandon [Merklin] and [Josh Jess] today, against a very good center forward, were dominant. They attacked everything. The key today was to get first contacts in the penalty area and we held up very well against some experience players today.”

The tie still leaves UMass winless this season, which is reminiscent of last year when the team lost its first six games. However the Minutemen do not feel pressure to win.

“We’re just trying to get better every game,” O’Leary said. “We know we’re going to have our hands full against many of our opponents. Pressure is all relative, I think we just want to get at it again now on Tuesday. Last year we finished very strong, we’re getting better all the time. What we’re trying to do is just prepare, find out what our best 11 is and what position by the time the conference comes around.”

Three of the Minutemen’s next four games will be played at Rudd field where they traditionally have always played better.

UMass does not have much time to think on this game before New Hampshire comes to town. The Minutemen will host the Wildcats Tuesday at 3:00 p.m.

Philip Sanzo can be reached at [email protected] or followed on Twitter @Philip_Sanzo.