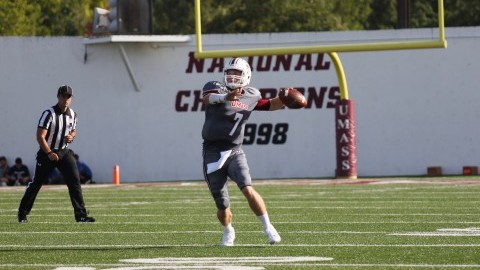 With just under two hours remaining until kickoff and the rest of the Massachusetts football team still dressing in the locker room before pregame warmups, quarterback Andrew Ford was the first Minuteman to take the field.

For the previous two weeks, Ford had been prepping and serving as UMass’ backup playing behind Ross Comis. But Saturday belonged to Ford.

With Comis out due to injury, Ford led the Minutemen (1-2) to a 21-13 win against Florida International at McGuirk Stadium in his first collegiate start. The win was UMass’ first of the season.

“Before the the walk-through on Thursday coach Whipple pulled me in his office and told me it was my show this week,” Ford said after the game. “I felt like I had a good week of practice with the guys, they were confident in me.”

After a shaky first drive that ended in an interception, Ford settled in and found his rhythm. He finished the afternoon 28-of-42 for 278 yards and three touchdowns.

“I knew he was a good player. That’s why we recruited him. He’s done a good job,” Minutemen coach Mark Whipple said. “The way we’re doing the system, he’s getting a lot of reps. It’s not like the NFL. So there wasn’t any panic.”

However, it wasn’t anything Ford did on the field, or even in the film room that assured Whipple’s confidence in his quarterback.

It was a joke.

“I thought one of the keys that made me feel better early in the week was, and he doesn’t know me really well, that he cracked a little joke on Monday,” Whipple said.

“So I felt better about the situation. I don’t think he’d cracked one since he’s been here. When you’re going to be the starting quarterback and you make light of things, that’s a good sign.”

Ford’s first touchdown of the afternoon came with nine minutes, 51 seconds remaining when he found a wide-open Jalen Williams for a 26-yard score.

Ford’s third and final touchdown pass came with 1:28 remaining in the third quarter when he found former high school teammate Adam Breneman on a play-action pass from one yard out. Breneman led UMass with 10 receptions.

“It was fun. I was excited to play with Andrew this week and obviously he did a really good job,” Breneman said. “That was a good thing going in. I think we all felt like we had two quarterbacks we feel good about. Obviously Andrew did a good job and I’m just happy we got the win.”

Despite how well Ford played, Whipple wasn’t ready to commit to a starter for next weekends game against Mississippi State.

“We’ll see. I’m not worried about tomorrow,” Whipple said. “I said it was the best quarterback situation I’ve been in since I was the Steelers. We knew we had two guys and we gave them the reps and everything else. It gives you guys something to write about.”

Comis did not join Ford and Randall West during warmups when players were loosening up in shorts and t-shirts prior to Saturday’s game. Comis did appear on the field, in pads, when the entire Minutemen went through their normal pregame walkthrough. He only took snaps, but did not attempt any throws during pregame.

Comis did take his pads off for the game, and was seen engaged on the sideline with Mark Whipple and passing game coordinator Spencer Whipple while UMass was on offense.