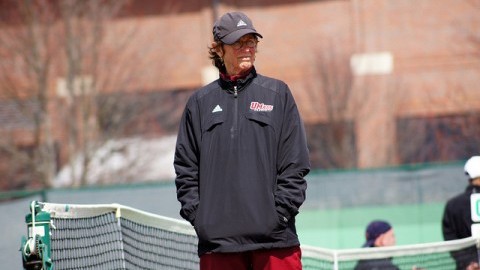 In what will be Massachusetts tennis coach Judy Dixon’s 25th and final season at UMass, the Minutewomen opened its fall season at the Brown Invitational over the weekend facing Brown, Rutgers and Stony Brook.

Senior Anna Woosley and freshmen Janja Kovacevic stole the show, as they both went undefeated in singles action. Kovacevic was 3-0 in singles play and Woosley won both of her matches. Kovacevic had two of her victories at the No. 3 position and the other at No. 2.

Dixon was impressed by both of her player’s poise and toughness, going as far as calling Kovacevic’s strong performance in her first tournament the highlight of the weekend.

“Watching her the last three weeks at practice, it was clear Kovacevic has talent but she competes better than she practices, which is a really good sign,” Dixon said. “She has a lot of talent and a big serve. She has a really good feel for the ball and I was pleased with her level of mental toughness in both singles and doubles.”

Dixon was pleased to see Woosley, who played through an illness this weekend, compete and play tough on the court.

“[Woosley] was outstanding,” Dixon said. “She’s improved every year that she has been here. The thing I’ve seen a lot; she has become mentally tougher. She always had skill but she is now a competitor. Real sign of maturity on her part. She was loosing 5-2 in the third set of a match and came back to win the last match. My hats off to her, she did a fine job.”

Kovacevic paired up with junior Anna Yrazusta in doubles play and the duo went 2-0 at the No. 2 position over the weekend. Woosley and sophomore Ruth Crawford were 1-1 at the No. 1 position, and won their lone match at the No. 2 position. Dixon said saw a lot of promise in the team’s doubles pairings and is looking forward to seeing how they progress together as the season goes on.

The tournament took place throughout the weekend as the Minutewomen saw a different opponent each day. Friday night the Minutewomen went 2-2 in doubles play and only won two individual matches.

UMass’ second match of the season takes place Wednesday in Storrs, Connecticut as the Minutewomen face the UConn Huskies.

In her last season as head coach, Dixon says she does not have one foot out the door – she is all in it for her team.

“I don’t want a Kobe Bryant or Big Papi farewell tour,” Dixon said. “I’m well aware that every day is the last of this, but I want to put it aside and revisit it at the end of the season,”

The matchup against the Huskies is the first individual match for both teams on the season, though no match counts toward the team’s record until after the New Year. The matches do however count toward each player’s individual record, but Dixon feels her team has done a great job so far on the year playing for the team and not focusing on their personal record.

“It’s more relaxed from my perspective,” Dixon commented about not having the games count toward their national ranking. “I went into this weekend looking for them to show me how they compete against other schools. I don’t think they thought of it for themselves, they saw it as a UMass match. They said ‘let’s go out and beat the team in front of us.’ It mattered to my players.”

In last season’s match with UConn, Dixon was disappointed in the lack of toughness her team showed. The Huskies puts a lot of balls back over the net and work hard as a team, and Dixon sees them as an opponent who is willing to do whatever it takes to win.

“They may not look beautiful on the court, but [UConn] claws their way through a match,” Dixon said. “I expect this team to do that this year. I think it will be a close match that could go either way, but my team has to match UConn’s mental toughness.”

Dixon added on the loss to the Huskies: “It meant something to them. They’ve been practicing hard and will be ready Wednesday.”