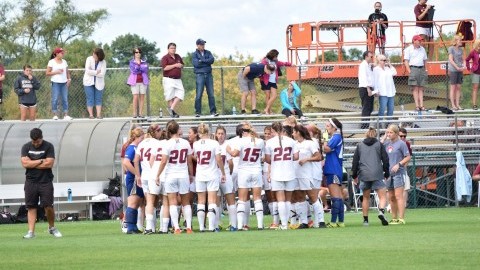 If the scoreboard hadn’t been present at Rudd Field, all anyone would have seen were two evenly matched teams, as the statistics of the game were almost entirely even.

UMass outshot CMU 12-11, capitalizing only once on a goal from junior Gabriela Kenyon—her second goal of the season.

The shots on goal remained constant throughout the game as both teams finished with seven, though it seemed to be only Chippewa players putting the ball in the back of the net.

A frustrated Salma Anastasio generated multiple offensive runs during her time on the field, consistently putting the ball on net and keeping the pressure on Central Michigan. The sophomore attempted to keep her teammates communicating and focused on penetrating the goal-box.

“We’re trying to be a more possession-oriented team this year, and I thought we did that really well today,” said Anastasio. “We just have to work on finishing and creating more chances, and I think that’s going to come as we grow as a team this season.”

Anastasio reflected on her team’s lack of through-ball activity when they needed it and expressed her hope that better communication will lead to better offensive runs.

“I think we could’ve created more opportunities, set each other up better, made more runs to confuse their back-line,” Anastasio said. “We have to be more creative, and I think moving forward that’ll come.”

The Minutewomen were prepared to battle in the air, where the Chippewas are known to be successful. Matz expressed his confidence in knowing what to expect when taking the field against Central Michigan.

“Anytime the ball goes into the air against Central Michigan, they’re going to win it. They’re just a big, tall, and strong team,” Matz said.

UMass graduated three seniors from the defensive back line last season, and the disadvantages of having such a young group showed from the volume of shots allowed on goal.

Junior keeper Cassidy Babin went head-to-head with CMU keeper Kristen Knutson, finishing with four saves as opposed to Knutson’s six. Both goaltenders faced action so similar that the only way to differentiate between the two was the scoreboard.

“Cassidy made three great saves,” said Matz.  “But we don’t want Cassidy to have to make saves.”

The evenness of the teams brought out extra competitiveness, leaving the teams with one yellow card each. The Minutewomen committed 14 fouls as opposed to CMU’s eight.

Matz told his team at the beginning of the season that their journey to the A-10s would not be an easy one. He hopes to help his young group of defenders gain the confidence and experience they need to play successfully at the division one level.

“Everything was equal,” said Matz. “We just have to work a little bit harder.”