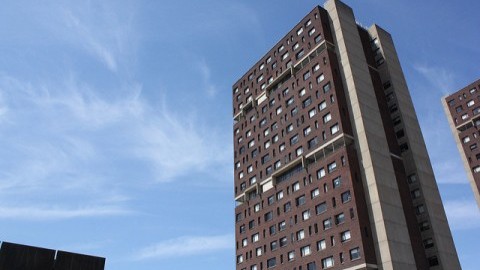 A crowd of approximately 80-150 students took to the streets of the University of Massachusetts’ Southwest Residential Area on Monday night after rumors of a clown sighting spread like wildfire.

“I saw crowds of people, not even a group of friends but tons of people together, sprinting down Sunset Ave,” said Olivia Izzi, a sophomore legal studies major who saw the crowd from her window and then followed the story on social media.

“It seemed like they were running away from something. It was nerve wracking. I had the same feeling as last year when there was a supposed gunman on campus,” said Izzi.

Benjamin Fitzpatrick, an undeclared sophomore who lives in Southwest, first heard there was a sighting of a clown on social media. “It got announced by some clown spotting account on Twitter” says Fitzpatrick.

He saw pictures on social media of students carrying hockey sticks, baseball bats, lacrosse sticks and hangers. “Someone had a fork,” he recalls.

“I showed up with a knife in my pocket. My friend met me with a fork,” Nicholas Soltowski, a sophomore resource economics major. Soltowski lives in Sylvan and first heard about the clown when his friend from Southwest called.

“Well, to be honest, I didn’t know I went [clown hunting] until I went but I continued because my friend convinced me that clowns are evil and because I was fearful of being attacked by a clown,” he said.

The “creepy clown” sightings is a new phenomenon across the nation and especially on social media. Several unverified twitter accounts such as @ClownSpotting and @ClownSighting have been releasing information about the spotting of “creepy clowns” nationwide. Another such clown hunt occurred at Pennsylvania State University.

On Monday night, reports of an armed clown forced a dorm evacuation at Merrimack College. A shelter in place notice was sent to students at 9:36 p.m. according to the Boston Globe. However, the police found nothing suspicious after clearing and searching the dorm where the clown was allegedly sighted.

Similar reports have been made across other college campuses nationwide including University of New Hampshire and Springfield College.

Alex Krell is a senior marketing major who first heard about the clown spotting from friends in Springfield College but does not feel threatened on the UMass campus. “It is a very safe community,” he said.

Julia Vlahopoulos, a junior majoring in bio-chem, does not feel threatened or unsafe either. “The mob wasn’t scary. I understand why students did this. I understand their point of view.”

“They were not fighting normal people. They were trying to fight something that they presumed to be dangerous,” she continues.

“No one got hit, no one got harmed. People were just protecting themselves,” says Fitzpatrick.

Krell, along with several other students interviewed on Tuesday evening, shared a similar mindset. “This is good for future reference. We are not gonna put up with it. [Clowns] are trying to scare people. Students are taking initiative.”

“Any clowns thinking of coming to UMass better rethink that because we are ready,” says Izzi.

Ed Blaguszewski, director of the Office of News and Media Relations, said that there are no confirmed sightings of a clown that the police are aware of or any incident involving a clown at UMass. “There have been falsely reported clown sightings in many campuses. Reports of this type has surfaced in a number of places leading to paranoia, rumors and speculation,” says Blaguszewski.

“We monitored the situation and responded to calls.”

Blaguszewski encourages the students to call either 911 or the campus police if there are concerns for safety. “People should not put themselves in danger and take the law in their own hands,” he adds.