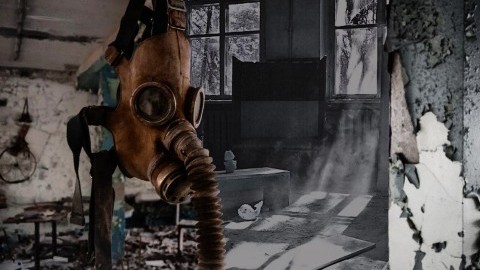 Until 1986, Pripyat, Ukraine was a model Soviet small city.

Designed to house workers for the massive Chernobyl nuclear power plant, it was filled with modern apartment complexes, well-supplied schools and recreational facilities for adults and children alike.

Flourishing and growing more populated by the year, it seemed to be something out of a government-sponsored advertisement.

In the early hours of the morning, a stress test that was being conducted at the power plant went horribly wrong. A series of explosions caused a graphite fire that burned for over a week, releasing massive amounts of radiation into the surrounding area and the atmosphere.

Of course, nowhere was more affected than the town of Pripyat itself, which was completely evacuated the following day, its 50,000 residents never to return.

Today, Pripyat remains completely abandoned, essentially unchanged since the day it was evacuated 30 years ago. Its apartment complexes, playgrounds and facilities have slowly disintegrated, at the mercy of the elements.

It was in this environment that Danish artist Jacob Kirkegaard decided to record “4 Rooms,” an album whose sole instrument is the room in which it was recorded.

“4 Rooms,” which was released as an album in 2006, is heavily influenced by “I am Sitting in a room,” a 1969 piece by American artist Alvin Lucier. In that piece, Lucier recorded himself saying “I am sitting in a room, different from the one you are in now/I am recording the sound of my speaking voice.”

Lucier then replayed the just-finished recording, and recorded the recording being played inside the room. He did this repeatedly until his voice had become an almost-mechanical hum, completely devoid of any human qualities.

More than he was recording his own voice, Lucier was recording the room he was in, and the way it ended up shaping the sounds he played inside of it.

Intrigued by this concept, Kirkegaard chose to apply it by simply recording the ambient noise in some of the larger, more derelict facilities of Pripyat, and recording the playback repeatedly.

Comprised of four pieces named after the rooms in which they were recorded – “Church,” “Auditorium,” “Swimming Pool” and “Gymnasium” – “4 Rooms” is an extraordinary example of the flexibility of sound and how one’s perception of art can be completely changed by the environment in which they experience it.

The unsettling, dramatic reverberations of “Church” sound like they’re being made by a choir from hell. “Auditorium” is more subdued, with the poor acoustics of the room constraining the sound into an incredibly narrow space. Bouncing off one another, the sound waves settle into a constant ringing that can be soothing or torturous, depending on the listener.

Appropriately, “Swimming Pool” sounds like it was recorded underwater. If you listen hard enough, you can hear the eerie, deeply distorted sound of the years-old contaminated water lapping up against and dripping down the decaying walls of the pool. The sounds of the water, distinct at first, slowly blend in with the drone until the two are impossible to discern from one another.

“Gymnasium” is easily the creepiest of the four pieces. Rather than smooth and even soothing, the edges of the drone on “Gymnasium” are metallic and uninviting. Restless, the noise often verges on becoming shrill, interrupting the record’s otherwise cool exterior with a buzz that often approximates an air raid siren.

As with all great ambient works, “4 Rooms” bends the listener’s normal concepts of an album. Though the four pieces are quite distinct from one another, by the end of, say, “Swimming Pool,” you may be certain that you’ve only been listening to one piece the whole time, when three separate ones have actually played.

Where it differs from normal ambient music though, is in its mission. Brian Eno once said that his landmark 1975 work, “Discreet Music” (often seen as the first modern ambient album,) was composed with the idea that music could be “part of the ambience of the environment just as the color of the lights and the sound of the rain were parts of that environment.”

In the case of “4 Rooms” though, the music is the environment itself. No tour of Pripyat – one of the most surreal places on Earth – could give anyone a clearer picture of its atmosphere than Jacob Kirkegaard gives the listener on “4 Rooms.”

It may not be the most conventionally scary piece of music in the world, but it has a way of ringing creepily in your head long after its final sounds have withered away.